Mike Holmes aims to only work with the best people and the best, most environmentally friendly products around. That's why I was so excited when I saw that Mike put a Kinetico water system into a home on Holmes Inspection. When it comes to water treatment, Kinetico is the top of the line, the "best of the best" as Mike points out. I know because my husband works for Kinetico (he loves his job!), and we have a system in our own home. Where I live, hard water is a problem. Not only is our city water hard, it's also stinky because of the chlorine, and tests positive for rocket fuel. I grew up part of my life on well water, which doesn't have the chlorine, but has lots of sediment in it that pretty much destroys all water using appliances, such as water heaters, dishwashers, faucets, you name it! Toilet bowl and bathtub rings galore! It's pretty gross.

Any legit water treatment system can address water hardness and give you pure water, but Kinetico is different. It's the only non-electric system on the market (although I saw in the clip they were installing a UV filter, something we don't have, and I'm sure a UV filter would use electricity). It also wastes the least amount of water and uses the least amount of salt to do its job. No electricity, less waste, and less salt not only saves the consumer money, but is also much kinder on the environment. And Mike Holmes is all about being environmentally friendly.

In this clip from Holmes Inspection, Damon Bennett talks with a technician about the system, and technician explains how the Kinetico system is going to turn their hard well water into soft pure water. And as you'll see, Mike puts his stamp of approval on it at the end! 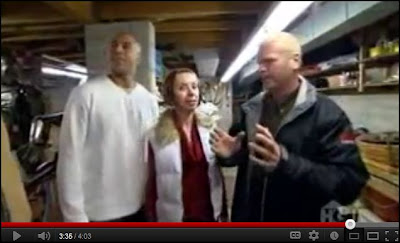