Uncross your eyes, this has nothing to do with religion. In common parlance, a "come to Jesus meeting" is an intervention of sorts -- a sit down with friends where certain behaviors are called out onto the carpet and discussed without interruption. I guess a different way of putting it would be to take someone out to the woodshed for a good lecture.

I was really upset yesterday, and I felt very disrespected as a loyal supporter of Mike Holmes. This was not just because of iTunes, but because Mike's US fans were summarily dismissed -- deemed non-existent -- by the way the iTunes thing was announced on both MakeItRight.ca, and in the e-newsletter, of which there is a separate US and Canadian version. The announcement failed to mention that a large segment of Mike's fanbase would be ineligible to participate. It seemed that we didn't matter, and that the website, the shows, and even Mike himself were not for us, even though we the US fans make up probably half of Mike's fanbase. It's funny they didn't announce the iTunes thing on Mike's Facebook page, or even the Holmes on Homes Facebook page. Could it be that if they had, they'd be inundated with pages and pages upon pages of complaints, and they just didn't want to deal with it? But that's just my own speculation.

Mike is all about making things right, and yet ironically for some reason, the communication/interaction that "Mike Holmes, Inc." has with his fans -- ALL of them, not just the ones who happen to live in the GTA -- is in need of great repair. If I could have a fantasy sit down, a "Come to Jesus Meeting" if you don't mind me saying, with Mike Holmes and the powers that be in the Holmes Group, this is what I would say, speaking as a careful and studious outside observer...


#1 - Mike Holmes, you ARE a celebrity. Yes, you are a contractor, nobody doubts your mad contracting skills. But just as you can be both a father and a son, you can also be both a celebrity AND a contractor, at the same time. One does not exclude the other, nor is there any shame in admitting you are indeed a celebrity. I don't know who told you that you weren't one, but whoever did is wrong and needs to be fired. The sooner you come to grips with and embrace your celebrity status, the sooner we can move on to point 2.

#2 - You are NOT a Canadian celebrity -- you USED to be, pre-2006 or 2009 or whenever it was that Holmes on Homes first aired internationally. No, you are now and forever will be henceforth from this point forward an INTERNATIONAL celebrity FROM Canada, in the same vein as Michael J. Fox and Wayne Gretzky. OK, maybe not quite in the same vein, but close. You see, there are a million and one reasons people around the world love you -- your charm, your skills, your integrity, and the list goes on. Pretty damn low on that list for most people is the fact you were born in Canada. Maybe it's higher for some, but typically being born on Canadian soil is sort of a neutral thing, much like being born in Mexico, or Africa, or ANY country for that matter. And yes, I am aware that Africa is not a country. It's not like you were born in England and have a cute accent like Gordon Ramsay. Perhaps if you were the first baby born in outer space or on the surface of the moon, we could talk, but sorry buddy, Canada (God keep her glorious and free) isn't as big a part of your TV persona as you might think. We, your international fans, acknowledge your Canadianism, we embrace it, we love you because of or in spite of it, but really, we see you as JUST Mike, who happened to be born in Canada and who loves and represents his country well.

#3 - Get a dedicated web team! If you already have one, they're not doing their job. Your website looks like amateurs made it using professional software that they bought at Costco. An international celebrity like yourself should not only have a website that loads properly on all devices - PC, Mac, and mobile - but it should also be current and up to date. The first and primary source for information shouldn't be someone's crappy blog, it should be your website, and you have failed to properly utilize this powerful tool. You owe it to yourself to put the best face possible on the empire you have built, and a large part of that face is your online presence. This includes having one of your team members taking photos and/or video at EVERY event you attend -- speaking engagements, ATV excursions, trade shows, etc. Fans should not be scouring the internet for someone's shaky cell phone video or blurry pictures taken 1000 feet away and posted to Facebook to get an accurate recount of your day. I'm talking PROFESSIONAL day, not private. You are of course entitled to your privacy, but what you do as Mike Holmes the international celebrity should be documented for your fans, because those are the kinds of things your fans want to know about.

#4 - COMMUNICATION. This is my biggest complaint and what I feel is in need of the greatest amount of maintenance. Facebook and Twitter are not cutting it when it comes to communication with your fans. An example of poor communication... when you attend an event anywhere in the world, it should be announced in advance, and 24 hours does NOT count as advanced notice. Let me tell you how it works. Trust me, I have experience in this department. When people watch your show, they get to know you, and they become fans, and some of those fans want to meet you. You become part of people's lives, and it becomes rather important for these people to know where and when they can come and say hi in an appropriate venue, such as a trade show or a book signing, as opposed to pestering when you're out with your family eating dinner. Your fans must know in advance of your coming in order to make arrangements, such as taking time off from work, getting child care, or perhaps even to make travel arrangements if they're really serious about meeting you. All of this of course goes out the window when you and your web team fail to communicate with your fans. Your public appearance schedule should be posted on your website well in advance so that loyal supporters can make the basic adjustments to their lives in order to come out and see you. And while you're there, your web team should be taking photos, video, and otherwise documenting your visit to share it with those who couldn't make it out for whatever reason. 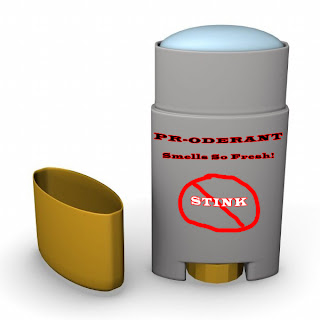 #5 - Your PR stinks. You need some PR-oderant. Case in point, yesterday's iTunes debacle, henceforth referred to by The Holmes Spot blog as iTunesgate. iTunesgate was a perfect example of how not to relate to your public. iTunesgate made quite a few American fans feel very alienated for no good reason. Some good old fashioned PR and a little bit of communication would have prevented, or at the very least softened the blow of iTunesgate. Another example might be how the Holmes Magazine went down. As the old adage goes, you can't always make everyone happy, but I think there is room for improvement when it comes down to managing your public image. Sh*t happens, but it's how you deal with the sh*t that makes or breaks you. It's a good PR person's job to shovel the sh*t so you end up smelling like a rose. At this point, it would be helpful to refer back to points 1, 2, 3, and 4 for a better perspective on how I think you could better handle the relations you have with your adoring public. Wash, rinse, and repeat.


I hope my criticism can be seen for what it is... a constructive albeit opinionated rant. The last thing I would say to Mike Holmes if I had him in the room with me is that I adore and admire him, and he's a huge inspiration to me. Nothing would make me a happier and more satisfied fan than to be able to watch ALL of his shows and specials on TV, and to be able to come by and say hi when he's doing a book signing or a garden show within 500 miles (driving distance) of my home. A little more consideration for fans at home and abroad would be very much appreciated.
Posted by The Holmes Spot at 1:26 PM