Up Against The Wall

When I was growing up, I had a neighborhood friend who lived next door to my grandparents' home. Inside, they had a giant staircase, right in the middle of their downstairs living area. It served as a divider which separated the kitchen and the living room. One day, my friend's dad got the bright idea to open things up a bit by demolishing the staircase. Apparently my friend's dad was not a structural engineer, because as it turns out, that staircase was doubling as a load bearing wall and down came the upstairs bathroom. No joke. The impending fiasco resulted in them losing their home, filing for bankruptcy, and moving across country. That's a pretty extreme example of what can happy when you mess with the structure of your home. In this article, Mike Holmes discusses the challenges of working with and changing structure. Adding windows or moving interior/exterior walls are becoming popular projects for many homeowners, but that doesn't mean that anyone who's seen a reno reality TV program is fit to do it. Changing structure requires permits, and whole lot of expertise to know how the weight of the home is supported by the foundation. And as my friend's dad found out the hard way, knocking down the wrong wall can end in disaster!

Mike Holmes: Up against the wall 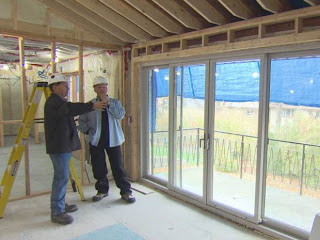 The Holmes GroupMoving or adding windows and doors to your home changes the structure of the house, making it a job for professionals only.


Knocking down interior walls and cutting into exterior walls to add more windows or make doors wider are not easy jobs. But they sure look easy on TV, don’t they? That’s part of the problem.

People get these great ideas for their homes after watching a design show. They’re inspired, excited, can’t wait to have it. Then they hire someone to do it. Before they know it, they have a demoed home, no money and no options. I’ve seen it happen a thousand times! Don’t fall into this trap. Learn what it takes to do it right.

Moving, adding or changing windows and doors are becoming popular projects. For instance, now that baby boomers are getting older, doorways will need to get wider so wheelchairs can get through. And moving windows or making them wider increase natural light coming into your home. Plus, if the windows are of good quality, installed and insulated properly, it can also reduce your energy bill.

But, like I said, these aren’t easy jobs. You can’t just move a door. You have to think about the structure — above and below it.

Each side of a door carries a point load, which is weight that is focused at a specific point in a structure. So when you move a door, you move the point loads.

It is crucial that both point loads are properly supported. To do that you need to bring in a pro who can look at what’s holding up either side of the door. They should be able to tell what needs to be done so that the door can be moved without compromising structure.

Recently, I was working on a house that was of brick and block construction. It had two sets of doors — one on the first floor and one on the second floor. They were stacked one on top of the other, so both sides of the doors lined up with each other. That meant the door headers were supported by block.

The homeowners were renovating the second floor and part of the renovation was moving the doors on the second floor. They hired a contractor who did it wrong. They moved the door not thinking about structure. Now only one of the point loads was supported by block; the other one was supported by the glass of the door below. Can you imagine all that weight held up by just glass? Talk about showing the cracks of poor construction.

When you bring in someone who doesn’t know what they’re doing, all they do is contaminate your home and screw things up. Knocking down one wall the wrong way — not to mention the wrong wall — can open up a can of worms.

The way the laws are set up, it would take years and boatloads of cash to go after poor contractors and tradespeople.

Save yourself the time, trouble and money. Do your homework — even if it takes months — to make sure you hire the right pros. No exceptions, no excuses.