Mike Packs the House For the "Building Resilience" Event in Calgary

Tuesday, October 1, 2013, Mike Holmes was in Calgary, Alberta Canada for the Building Resilience With Mike Holmes event, sponsored by the Insurance Bureau of Canada. The free event was to help inform homeowers how to be resilient in the face of future storms and natural disasters. Nearly 1,000 people packed the TELUS Convention Centre to hear Mike speak. The city of Calgary then presented Mike with a white hardhat to honor his visit, which is a twist on the traditional White Hat Ceremony in which dignitaries and celebrities visiting the city of Calgary are presented with a white Smithbilt hat on behalf of the tourism bureau and the mayor's office. 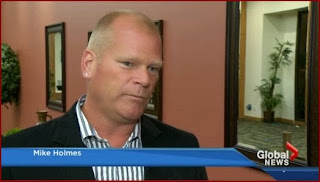 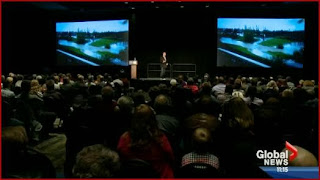 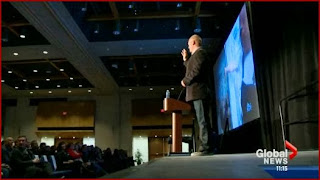 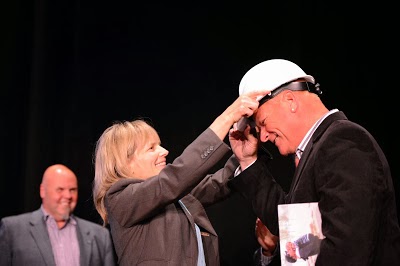 Award-winning Holmes on Homes® television host and contractor, Mike Holmes received a warm welcome from close to 1,000 Calgarians on October 1st at the TELUS Convention Center.

The City of Calgary, in partnership with The Insurance Bureau of Canada hosted Building Resilience with Mike Holmes – a free public event for residents looking to learn what steps to take to build a more resilient home, while saving money and reducing their environmental impact.

The City’s Manager of Sustainability, Carolyn Bowen, kicked off the evening with a welcome from the City; hosts Steve Kee and Bill Adams provided a welcome from the Insurance Bureau of Canada, the sponsor for the event. “While we don’t have all the solutions for climate change and severe weather, we have some ideas,” said Adams. “It’s time for a healthy dialogue about how we can make our homes and our communities stronger and more resilient.

”Mike’s ‘do-it-right’ attitude and expertise resonated with Calgarians as he made the connection between adapting homes for future natural disasters and applying a “green” lens when making restoration choices, in order to lower our environmental impact. ”We need to focus on making our homes safe, durable, efficient and strong,” stated Holmes. “A home shouldn’t just LOOK good, it should BE good.”

Holmes encouraged the audience to keep up with regular home maintenance to protect their home and ensure the health and safety of their family. “Products and building practices have come a long way,” stated Holmes. “We know how to make a home more fire-resistant, mould-resistant, energy efficient and watertight than we did ten years ago--even five years ago. It doesn’t need to cost more to build a better home.”

Holmes was named Forbes’ Third Most Trustworthy Celebrity in 2012 and was voted the second-most-trusted Canadian by Reader's Digest for two consecutive years. But according to the celebrity contractor, his biggest achievement has been educating the public about proper construction and protecting their home.

Exhibitors from the Insurance Bureau of Canada, the Calgary Real Estate Board, the Canadian Home Builders Association, Green Calgary, the University of Calgary, Enmax, the Alberta Flood Recovery Task Force, and the City of Calgary were also on hand to answer questions from the public.

Posted bymedia.relationsonWednesday, October 02, 2013
﻿
Posted by The Holmes Spot at 9:52 AM