It's true, Mike Holmes receives a lot of criticism. It doesn't take but a simple google search to find scathing videos and articles from Mike's critics. From day one, Mike Holmes sought to take on the industry, and has found out that sometimes the industry pushes back.

The current firestorm, if you want to call it that, started when Mike Holmes stated to Readers Digest that "80 percent of contractors are bad." His exact quote was:


[READERS DIGEST:]What percentage of contractors are doing good, honest work?
[MIKE HOLMES:] I call it the good, the bad and the ugly: 20, 70 and ten percent, respectively.

(For the full article, read http://www.readersdigest.ca/home-garden/home-improvement/making-it-right-interview-canadian-contractor-mike-holmes)


I can understand the industry being a little off-put by this remark. It does sound flippant at best and overly harsh at worst. But it is just one man's opinion. That's how he feels, because that's what he's seen.

In the end, Mike's heart is not with the industry. His heart belongs to the people he helps, and the people who do get screwed by bad contractors.

A lot of critics will turn to the age-old "It's about the $$$" criticism. Last I checked, Mike doesn't live in a palace, and he doesn't go out clubbing with Paris Hilton every night with an entourage of women and bodyguards. I know he has a watch fetish, but most of the watches I've seen him wear are well under $400. Mike has enough money to retire at age 50 and live a comfortable existence for the rest of his life, and yet he continues to work and work and work. And if he doesn't check himself, he'll probably work himself to death. I don't buy it that he does it for the money. I honestly believe his heart is in the right place, but sometimes his mouth gets ahead of him. Sometimes. Other times, I think he's speaking his honest opinion and he just doesn't care who likes it. You'll have to decide for yourself which one of those scenarios fit this situation. 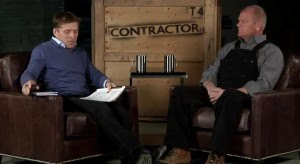 Well, you’ve had your say about what the show Holmes Makes It Right has done to our industry and your reputation. Now the host of the show, Mike Holmes, will get a chance to answer back. Last week, I did a 30 minute interview with Mike that we will be posting over the next few weeks on canadiancontractor.ca.
I was impressed with Mike during the interview. He was very, very forthcoming while we talked, and didn’t shy away from any of the criticisms you leveled at him. I’ll confess, I didn’t directly quote some of the more personal attacks we received (like, “I wouldn’t let Mike build my doghouse!”) but I did zero in on the three objections that came up again and again; that he doesn’t have a ticket for any of the work he does, that he gets the benefit of sponsors supplying product for free and that he is destroying the reputation of the industry to fill his own pockets.
Now that we have begun a dialogue with Mike, I expect it to continue. At the end of the day, Mike considers himself one of us, and wants to make the relationship between him and the industry right. The only way that happens is if we talk, you you need to continue to send your comments. It would be very interesting if you could send comments that were specific to a particular episode of the show. Just comment on this post to continue the dialogue. In the mean time, stay tuned to this website for more from Mike.

I think this is a good time to point out, as I often do, that this is a unofficial fan run blog. I don't represent Mike, in fact, I don't even know him! Please do not confuse my opinions as any kind of official representation! :-)