A couple days ago, Mike Holmes was in Kalamazoo, Michigan selling out shows like a rockstar. What some people might not know is that this was not Mike's first time in Kalamazoo. Mike was at the 2011 Kalamazoo Home Expo, and just like this time, he was bringing in large crowds of people. Here's a 2011 interview with Mike at that Expo. I've also attached the accompanying article about the event (FYI - whoever wrote the article doesn't know how to spell "contractor" LOL)

Here's an accompanying article about Mike at the Expo in 2011 from WKZO.com: 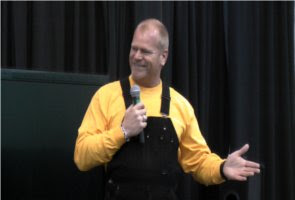 Mike Holmes from HGTV's "Holmes on Holmes" speaks at the 2011 Kalamazoo/Battle Creek Home Expo in Portage, Michigan. 3/12/2011
PORTAGE -- (WKZO) The Home Builders Association of Greater Kalamazoo is focused on promoting the need to work with licensed contracters and professionals of any trade. That belief easily aligned them with television personality and contractor Mike Holmes from HGTV's "Holmes on Homes".
After several conversations the Home Builders decided to contact Holmes to see if he would be able to headline the 2011 Kalamazoo/Battle Creek Home Expo in Portage. That became reality Saturday morning when fans of Holmes lined around the building waiting to attend a sold out show with the contractor.
Every seat was filled while Holmes performed for an hour discussing his initial childhood interest in building and even going into what he believes is a need for him to help in other parts of the world. Holmes has already gone to Haiti with other contractors to help with the rebuild of their country following their devastating 2009 earthquake. But he says he is now considering lending a helping hand in Japan which is suffering from the destruction an 8.9 earthquake and a tsunami.
Holmes also took questions and spoke with the audience about a need for more women in his profession as well as his involvement through his foundation to train the younger generations. Holmes was spoke very clear about the importance of getting the younger generation trained to take part in the industry so it continues to grow.
Wincountry.com and wkzo.com had the chance to speak with Holmes before his presentation. Segment 1 is below. We will be releasing the video in segments on our "Around The Home" section on wincountry.com. "Around The Home" is a section dedicated to providing the Kalamazoo/Battle Creek community with accurate information on the latest in home improvement, videos from local contractors and businesses and podcasts from our experts.
We'll release a new segment every day next week on "Around The Home" so visit the "Around The Home" section by clicking here: "Around The Home".