Sherry Holmes Is Getting Her Own Show!

Yesterday, March 8, was International Woman's Day. Mike used the opportunity to point out and recognize all of the wonderful ladies who work with him on his crew, including his daughter, Sherry. Sherry took the leap from office staff to crew member during the filming of Holmes on Homes in New Orleans, and from that moment on, she was hooked! Although the details he gives are sketchy at best, Mike indicates in this article, reposted from the Ottawa Citizen, that Sherry will be doing her own series, along with two other female "powerhouses." Hmmmm... this calls for some good ol' fashion speculation! Perhaps Kate Campbell will be one of them? I don't know, but that won't stop me from guessing! All I know is that ladies like Sherry Holmes prove that just because you're beautiful doesn't mean you can't swing a mean hammer.
As far as the article goes, Mike has proven himself over the years to be very pro-women in the trades. He has sought to increase the percentage of females in the trades because he believes women will benefit the industry and make it better. He states in the article, as he has on several occasions before, that women in the trades will keep their male counterparts honest. As a woman, I really appreciate Mike vote of confidence. I also appreciate that Mike not only hires women on his crew, but his expectations of his crew members are equal across the board. Lastly, Mike acknowledges that opening doors that were previously shut won't be easy, but it's worth it, and he encourages women who want to pursue a career in the trades to work hard and learn all they can.
From the Ottawa Citizen:

Celebrating women in the trades on International Women's Day 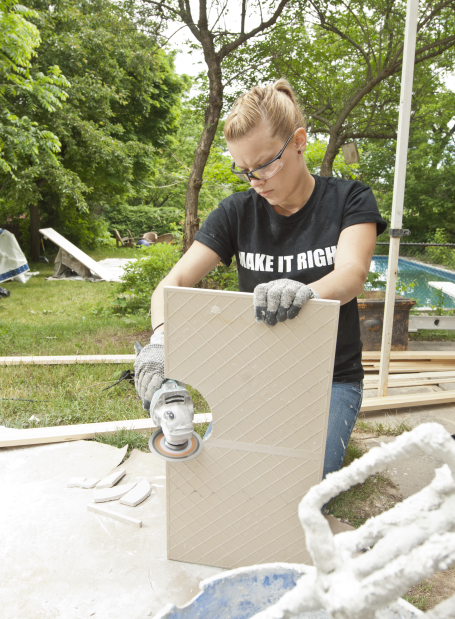 Sherry Holmes working on Mike’s crew for Holmes Makes It Right. Photograph by: Alex Schuldt, The Holmes Group
I work in the trades and that means the women who work with me are in the trades, too. There is no doubt in my mind that they are part of the reason why people celebrate International Women’s Day — this year on March 8. I get to step back and be proud of the women I work with every day.


It’s always a great moment when your kid decides to follow in your footsteps — even if it’s just for a while. It was a proud day for me when my son, Junior, told me he wanted to be a contractor — and what he’s accomplished since then has been unbelievable. But it was different when my daughter Sherry said she wanted to join the crew.

Sherry had been working at the office for years, helping run the business side of things. Then Hurricane Katrina happened and, next thing you know, the crew and I were heading south to New Orleans. We were going to build a hurricane- and flood-resistant home for one of the victims, Gloria Guy. I’ll never forget Gloria; she was another firecracker.

This was a huge opportunity for everyone. We knew that this job meant a lot to a lot of people, and Sherry wanted to help and be part of that. The truth is there isn’t a better reason to get into the trades — or do anything, for that matter. What happened next, no one could have predicted: Sherry was hooked.

Helping out in New Orleans turned into a permanent position for Sherry on the crew for my series Holmes Inspection. That turned into her working on the crew full time for Holmes Makes It Right.

And now Sherry’s stepping out from her dad’s shadow and taking on her own construction show, along with two powerhouses by her side — women too, of course.

They are going out there, speaking to other people in trades, working with contractors, managing jobs and making sure they get it done right.

Together, these fix-it chicks are proving construction is not a man’s world — at least not anymore. And I’m thankful for it.

I’ve always said women in the trades keep the men honest because when women work in the trades, they give it everything they’ve got, every day. When guys see that, it makes them work harder. It’s like teamwork — one person pushes hard, everyone else does, too.

Women are still fairly new to the game. Although they’re usually in the top 10 to 15 per cent of their class, they’re among the last 10 per cent to get hired. There might be some old ideas out there that need to be demolished. But it makes women hungrier to learn, to get better, to be the best and see how far they can take their skills. And they’re giving guys a run for their money.

There’s a lot of power that comes from using power tools — it’s no joke. You learn to have no fear, not be intimidated by big tools or powerful machines. It takes confidence to use the tools of the trade. The kind of confidence that not every girl gets a chance to develop growing up — but I made sure both my girls did. Also, thanks to the generations of women who are making headway every day, more girls are growing up with that chance.

I can’t tell you how many homes I’ve gone to where the handy “man” is a woman. The numbers keep growing every year.

Confidence in your abilities is something that boys and girls should have an equal opportunity to develop. Not to mention, there’s nothing like the feeling of learning how to do something yourself. Especially something that people didn’t think you could do — maybe even you.

I think it’s healthy to have shop class and home economics in schools. We should expose kids to as many different skills as we can — you never know what hidden talent they will show you. If they never get that chance, we all lose out.

What if tomorrow’s leaders never learned that they could develop and supervise or manage a project through to completion? I want to see more women get out there and run the show — and not just any show or someone else’s show, but their own show. I want to hear them call the shots — say what they mean with confidence and mean what they say with heart. That’s what integrity is all about.

If you’re a woman thinking of getting into the trades, go for it. If it’s your passion, learn as much as you can. Doors that were shut continue to open for women. I’m not saying it’s going to be easy. It might even be harder for you than it is for others. But I promise you it will be worth it.


© Copyright (c) The Ottawa Citizen
Posted by The Holmes Spot at 9:31 AM