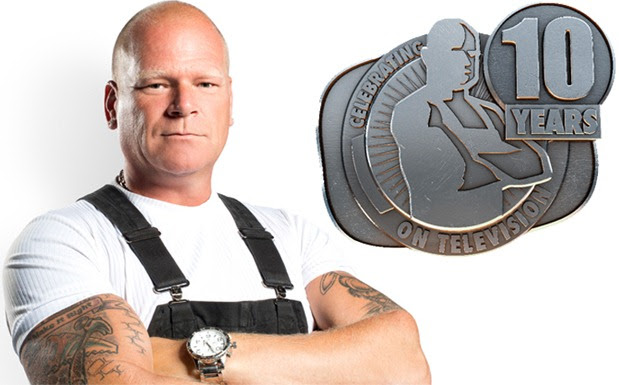 This week has been a whirlwind for Mike Holmes and his fans as he celebrated a huge milestone: 10 years on television. In honor of this huge accomplishment, HGTV Canada aired a special featuring highlights from the last ten years of Mike on TV. Unfortunately, not living in Canada, I was unable to view the special, so I'll be unable to comment on it beyond what I've read on various website.

Being that Canada has Mike fever right now, the Holmes Spot has received a huge surge in traffic over the last couple of days. How much of a surge? About 10x more than average... 8,000 visitors in about six hours. That's pretty unbelievable. I bring this up because in my site stats, I can view keywords that my readers are searching for, which gives me an idea about what is trending. Here are the top 10 keywords searched for on the Holmes Spot:

Four out of the ten top queries have something to do with Mike's marital status, which was very briefly touched on by the anniversary special from what I was told. I've also heard that the question "is Mike Holmes married" is one of the most frequently asked questions on the HGTV website as well. Is it any wonder why? Mike's a good looking guy! For all of you inquiring ladies out there, Mike Holmes is not married... but don't get too excited. He's been in a steady relationship for about 10 years. He seems very guarded about his relationship, so you won't hear a whole lot about his significant other, Anna, who is also amongst the top 10 search results on the Holmes Spot. You will, however, see her on Mike's arm at many of the special events that he attends. There's your answer!


Tonight marks a big milestone for Mike Holmes as we celebrate his 10 years of making-it-right on HGTV Canada. Our anniversary special to mark the occasion, Behind the Overalls, airs at 9pm ET and gets personal with Canada’s most trusted contractor. We ask Mike Holmes fan questions, revisit his childhood, take a look back at some of his fondest memories over the last 10 years, as well as hear from celebrities, such as HGTV’s very own Scott McGillivray and Bryan Baeumler, as they offer their congratulations.

Be sure to join us in celebrating Mike Holmes’ 10 year milestone at 9pm ET, and chat with Mike (@Make_It_Right) and HGTV Canada (@hgtvcanada) during Behind the Overalls’ broadcast live on Twitter, follow #MikeHolmes10 to join in on the convo.

Think you know Mike Holmes? Check out this fun facts infographic for some Holmes trivia: 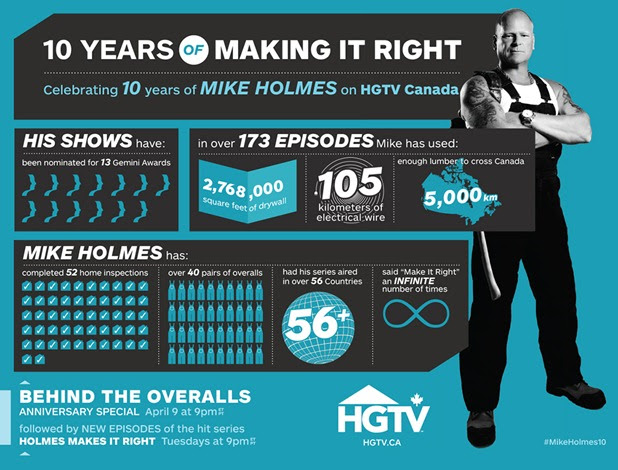