Today's Picture of the Day...

If you didn't know, the Holmes Spot blog posts a picture of Mike every day in the "Picture of the Day" section of the blog. Check out today's picture of the day... 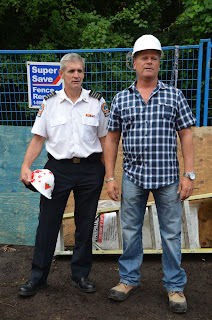 This is a photo of Mike and a Toronto FD EMT during the High Park rebuild back in July 2012. You can see the rebuild in the "Building Castles" episode of Holmes Makes It Right, which debuted on HGTV Canada in October 2012. Mike's new show is set to debut some time early this year (2013) in the US on HGTV.  An official date has not yet been announced, but as soon as it does, we'll be right on it!
In Mike's latest video, posted just before Christmas to his website, Mike confirmed that his new show Holmes Makes It Right would be airing soon in the US, and that there would be 18 new episodes back to back (Season 1 and the yet-to-be-aired Season 2).
My speculative guess (and it's only a guess) as to when the new show will debut in the US is March, because that's when new shows come out for the spring season in the US. If you're really impatient, you can do a google search and find some episodes of Holmes Makes It Right that some naughty hacker put up on YouTube. Have to admit, I watched the "Building Castles" episode and one other, just so I could have some perspective to blog about. But the rest, I'm saving for when the show debuts in the US!