It's the last piece of news we ever want to hear, let alone on our birthday. Mike Holmes announced today that his dear friend and colleague Craig Lowe passed away in a scuba diving accident late yesterday evening. Craig was Mike's go-to painter since the early days of Holmes on Homes. About a year ago, Craig helped Mike launch and served as the director of the Holmes Referred program. Craig was one of Mike's most respected sub-contractors, and he will be missed terribly by all.

Today I received tragic news that Craig Lowe, a good friend and fellow tradesmen, died in an accident on the coast of Cape Breton while pursuing his passion of scuba diving. I have been working with Craig since day one of Holmes On Homes. He was a generous, dedicated and talented man who was always willing to lend a hand. My heart goes out to his wife and his daughters, he will be greatly missed.

A 41-year-old man died after he disappeared while scuba diving alone in Cape Breton on Saturday night, according to Nova Scotia police.
Ingonish RCMP say they were contacted around 10 p.m. by the Joint Rescue Co-ordination Centre when John "Craig" Lowe of Mississauga, Ont., failed to return from his dive.
RCMP Const. Eric Latwaitis says the Coast Guard, local fishermen, volunteer fire departments and local community members searched the shoreline and waters.
"It's a very close-knit community. So when a community is on the water they realize how fast a tragedy can happen. So it's actually a very standard response," he said.
Police say the man was diving alone in the Dingwall - Aspy Bay area, about 300 metres from shore and about 15 metres deep.
His body was recovered from the water just before midnight 12 metres from his anchored boat in about four metres of water.
Latwaitis says the man was an experienced diver and had already gone out diving with a friend earlier that day.
"My understanding is that's one of the golden rules in diving. You don't dive alone," he said.
"But he wanted to go out for one last dive."
An autopsy has been ordered.

Edit: I sent a short email expressing my condolences to the email address listed on Craig Lowe's professional website, and this is the auto response I received back. Please keep the Lowe family in your thoughts and prayers. 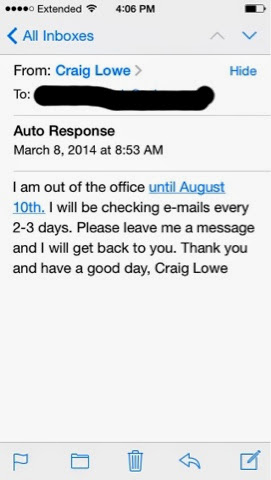 From The Chronicle Herald:

Craig Lowe was regular on Holmes on Homes renovation show

Craig Lowe of Mississauga, in a screen grab from a YouTube video on painting, has been identified as the
diver who died in waters off Dingwall in Cape Breton Saturday night. Lowe, owner of Lowe Painting, was
once a regular on the Holmes on Homes renovation series. (YOUTUBE)

Johnnie Fitzgerald says no one knows why John Craig Lowe, a 41-year-old man from Mississauga, Ont.,
died suddenly Saturday night while scuba diving alone in the ocean off Markland Beach in northern Cape
Breton.
Fitzgerald, a fisherman and a diver from Dingwall, said Lowe was an experienced diver and the water and
weather conditions in Aspy Bay were good at the time.
“He was on the bottom,” said Fitzgerald, one of the local fishermen who was on a rescue boat that found
Lowe, who went by Craig.
“He never got his gear off. To me, it seems like something ... medical. Being in that shallow water, usually
you just let your weight belt go and rise right to the surface.”
Lowe was owner operator of Lowe Painting and made regular appearances as the painting expert on Holmes
on Homes.
Mike Holmes commented on Lowe's death on Twitter.
“Today I received tragic news that Craig Lowe, a good friend, died in an accident while pursuing his passion
of scuba diving.”
Baddeck RCMP Const. Eric Latwaitis said a man was reported missing around 10 p.m. Saturday, launching
a brief search by the Canadian Coast Guard, local fishermen, volunteer fire departments from the area and
community members.
Lowe’s dive boat was found anchored about 300 metres from shore and his body was recovered at around
11:40 p.m., about 13 metres from the vessel.
RCMP identified the man Sunday afternoon as John Lowe.
Fitzgerald said Lowe had been diving with three others earlier Saturday around St. Paul Island and he wasn’t
ready to call it a day.
He said divers know never to dive alone, but they sometimes do so in shallow, clear water.
Fitzgerald said the other divers, including one of Fitzgerald’s brothers, went ashore on Saturday and Lowe
decided to dive in about four metres of clear water. He wanted to look for artifacts from the Auguste, a French
privateer that went down in a storm in Aspy Bay in 1761.
Divers have spent years searching for the gold and silver treasures reportedly carried by the Auguste and its
passengers.
Fitzgerald said Aspy Bay, a wide inlet that faces the North Atlantic Ocean and often gets hit by storms and
strong tides, still gives up relics from the Auguste.
“Every time you get a big storm around here, it’s the best time to go,” he said. “It changes the bottom.”
Scott MacKinnon, chief of the Cabot Volunteer Fire Department, said that while the many shipwrecks in
Aspy Bay make it an attractive dive site, it’s rare for the fire department to deal with a call there.
“We had a call last week for a missing windsurfer, but he was found,” said MacKinnon.
“We get a fair amount of divers here, but this is the first time we’ve been called for a diver.”
Fitzgerald said Lowe leaves behind a wife and two young children.
On Sunday, Latwaitis said RCMP are continuing to investigate the death. An autopsy will be performed in
Halifax and Lowe’s diving gear will be examined there by the RCMP’s underwater recovery unit.
In recent years, three other men have died while scuba diving off Nova Scotia. A Halifax man died in June
2013 near Halifax, a Baddeck man died in September 2012 while diving in the Bras d’Or Lake, and a
Dartmouth man died in July 2012 in waters off Lunenburg County.

UPDATED: Craig Lowe of Mississauga was a regular on Holmes on Homes
DINGWALL, N.S. — RCMP are investigating the death of 41-year-old scuba diver John (Craig) Lowe of
Mississauga, Ont., on Saturday.
Lowe was diving alone in the Aspy Bay near Dingwall. He was reported missing to RCMP at 10 p.m., two
hours overdue. His body was found at about 11:40 p.m., about 40 feet from his boat in water 12-15 feet deep.
The boat was 900 feet from shore.
“He was out diving with buddies and had done two or three previous dives during the day,” said Const. Eric
Latwaitis of the Baddeck RCMP. “He wanted to go for a last dive and went by himself.
“The water conditions and the weather wasn’t overly choppy or anything of concern.”
Lowe, who went by Craig, was a professional painter by trade who owned and operated Lowe Painting in
Mississauga. He regularly appeared on the Holmes on Homes television show.
“(Sunday) I received tragic news that Craig Lowe, a good friend, died in an accident while pursuing his passion
of scuba diving,” the show’s host, Mike Holmes, said on his Twitter page.
“Craig was a generous and talented man who was always willing to lend a hand. My heart goes out to his wife
and his daughters, he will be missed,” Holmes added in another tweet.
RCMP, the local Coast Guard auxiliary, fishermen and volunteer fire departments searched where the man’s
diving boat was anchored. Residents searched the nearby shoreline.
Latwaitis said Lowe’s death isn’t considered suspicious by RCMP. The diver’s equipment will be examined for
mechanical malfunction, and the Nova Scotia Medical Examiner Service will complete an autopsy to determine a
cause of death.