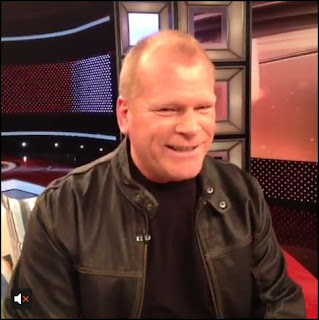 Yesterday, Mike made an appearance on ET Canada Live in honor of his up-and-coming 10th anniversary special. Unfortunately, if you're not Canadian, you can't watch the video. I'm not Canadian, and so therefore I cannot comment on video footage I haven't seen. For the purposes of this blog, I make it a point to only link to things I can personally view and review, so if you're curious to see the video, it's on the ET Canada website, but you have to have a Canadian ISP. Mike did post this:

It seems to be on a loop, which makes it really weird if you leave it running while you click to another window to do something else.

There's been a discussion happening on one of Mike's Facebook pages, I think the Holmes Makes It Right page to be exact, where people are lamenting Mike's US fans not getting to see the tenth anniversary special that will air on HGTV Canada in April. Some people have stated they think Mike is wanting to rebrand himself as a Canadian persona and pull out of the US market all together for the purposes of spending more time at home. I don't think that's the case, but if it were, that would be disheartening. I think the reason why Mike seems to be pulling out of the US is because HGTV/US is giving him the proverbial middle finger. I don't even watch HGTV/US anymore because of the non-stop boring crap they run day in and day out. And yet for some reason, they think that 57 episodes of House Hunters everyday is better than picking up Mike's new show. It doesn't make sense, and I'm sure there are details and negotiations that are not being discussed publicly that would shed light on the situation. If anybody in the know wants to share those details with me, I'll be happy to listen.

In the meantime, we, the US fans and supporters, need to put on our happy faces and celebrate Mike's accomplishment and just hope that some naughty hacker will rip the show onto YouTube long enough for people to see it before it's promptly removed by the network. It's sad when you have to resort to illegal activity to see a TV show!!! The Holmes Spot has also started a petition, which I think has gotten a lot of support in the last couple of weeks since its inception. The petition is petitioning HGTV to air Holmes Makes It Right in the US. It might be fruitless, but It's all that I can think of to do. If you're so inclined, it would be wonderful if you could add your name to the list and help spread it around.

PETITION HGTV/US TO AIR HOLMES MAKES IT RIGHT!
Posted by The Holmes Spot at 8:47 AM