Yesterday I posted part three of the interview with Mike Holmes conducted by CanadianContractor.ca. 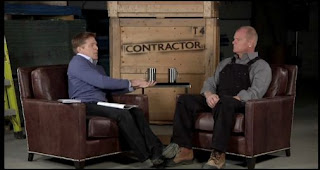 This third and final installment turned out to be just as interesting as the first two. It started out with the host asking Mike what percentage of homeowners bear some responsibility for their shoddy renovations? Mike's answer seemed to surprise the host - "At least 50-60% of them." As someone who has read Mike's books and watched his shows, I've seen Mike scold and warn homeowners over and over again about the dangers of not checking references, rushing into a job, cheaping out, or not making sure that the contractor gets the proper permits needed for the job. It's very, very rare that Mike walks into a home and states that the homeowner got screwed in spite of doing all their homework. Perhaps unaware of this, he wags his finger at Mike and laughs, "You know, that's really important for [other contractors] to hear." Mike then correctly points out that he exposes not only the contractor's bad work, but also the client's bad decisions as well because he wants to educate homeowners as well as other contractors. 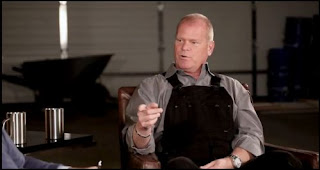 Mike then defends himself as a professional - "I've been doing this since I was a kid... This is all real, this is not phony, and it doesn't matter if people believe me or not. I know who I am. I know what I'm talking about." Mike also expressed his desire for professionals to work together to produce a superior product for the consumer. He gave the example of a bathroom where the toilet is in the wrong spot because the carpenter and the plumber didn't collaborate to create an appropriate layout. "I've learned from experience that it takes time to get good at what you do," said Mike in his final closing comment. 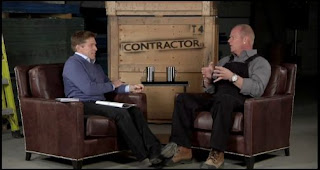 During the host's end remarks, he expressed an agreement with Mike that there is a need for the industry as a whole to work together to become better. After the first two segments, I was surprised to see the interview close so amicably and succinctly. I was expecting fireworks and harsh criticism, but I'm happy to see that the two sides were able to come to some sort of middle ground. The question remains though, will this be enough? Does this interview quell the ad hominem attacks that many websites and forums lob at Mike? Probably not, but it's good to know that Mike acknowleges that he has critics, and is able to address them intelligently with solid, satisfying answers. Overall, I think Mike did a great job standing his ground in a less than friendly environment.
Posted by The Holmes Spot at 9:19 AM