Merry Christmas and happy holidays from the Holmes Spot! For the last couple of years, I've put together some (in my opinion) very cute little Christmas "gifts" for you, the readers, and also for Mike and the crew. This year, however, I've been battling some rather severe pregnancy symptoms. It's been a wild ride in the evenings for me, which is why I'm glad that Mike made an awesome Christmas card for all of his fans to share. Last year, Mike and his crew were depicted on snow mobiles, doing all sorts of crazy things as they made their way down the hill. 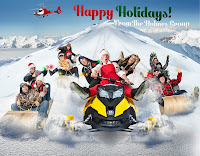 This year's card was just as adorable and full of heart. In it, Mike, Mike Jr., and Sherry reenact the famous scene from "A Christmas Story" where the little boy gets his tongue stuck to the flag pole after being triple dog dared to lick it.

Mike also posted this "behind the scenes" video, showing viewers how the card was made. Enjoy!

Merry Christmas and Happy New Year from the Holmes Spot. I am looking forward to next year in so many ways! Unless something big or extremely interesting happens, the next time I post will probably be after the new year. Hopefully my sickness will alleviate soon and I'll be able to post more in 2015! Cheers!