I have been waiting for this ever since I heard he appeared on the show a week ago during Mike and MJ's stint in Vancouver, BC for Skills Canada. On June 5 of this year, Mike Holmes appeared on the Fanny Kiefer show for an intimate sit-down. I'm still watching it. Afterwards, I'll comment on it... so far, one of the best and most intimate interviews I've seen! Definitely worth watching!

This is probably my favorite Mike Holmes interview by far! In part one, we learn that Mike Holmes is the straightest guy in the world and doesn't even look at the other window sill! (LOL!) During the course of the interview, Mike Holmes talked about his background, his kids, and the story behind his earrings. He also discusses his future plans to create a green community, and a little bit about his parents. I was surprised to learn just how simple Mike Holmes lives, and how much he loves Crown!

As I'm watching this video for about the third or forth time, I noticed something rather...familiar! 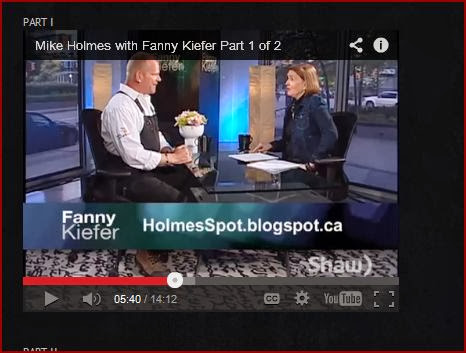 LOL!!!! I can't believe I didn't see it before! They listed the address to this blog on the interview!!! FYI, this website is UNOFFICIAL, and Mike's website is www.makeitright.ca. But I'm totally flattered!!!
Posted by The Holmes Spot at 9:20 AM