Before I post about the SickKids Charity Open House, which took place this year on June 2, Mike posted this photo on his Facebook page this morning. As most of us know, Mike is currently in Germany with his son MJ supporting Team Canada for the World Skills Competition, which is set to wrap up July 8:

"Another Leo in overalls @WorldSkills."

Cute picture! Mike and MJ are a couple of heart breakers!

Getting back to the topic at hand, on June 2, 2013 Mike attended a charity even to raise money for sick children, the SickKids Charity Open House, which was put on by DaSilva Racing in Pickering, Ontario Canada. Being that DaSilva Racing is all about racing Fords, Mike Holmes showed up in a car similar to this one: 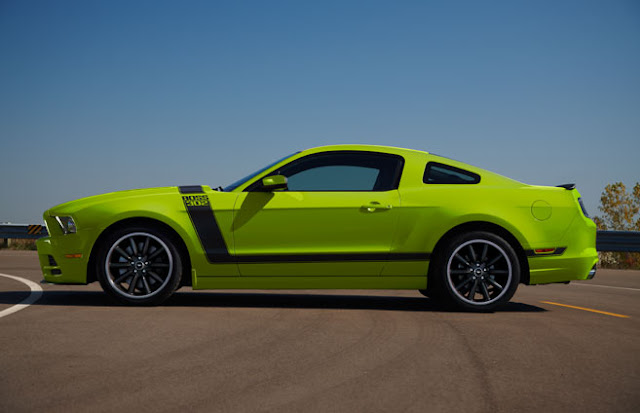 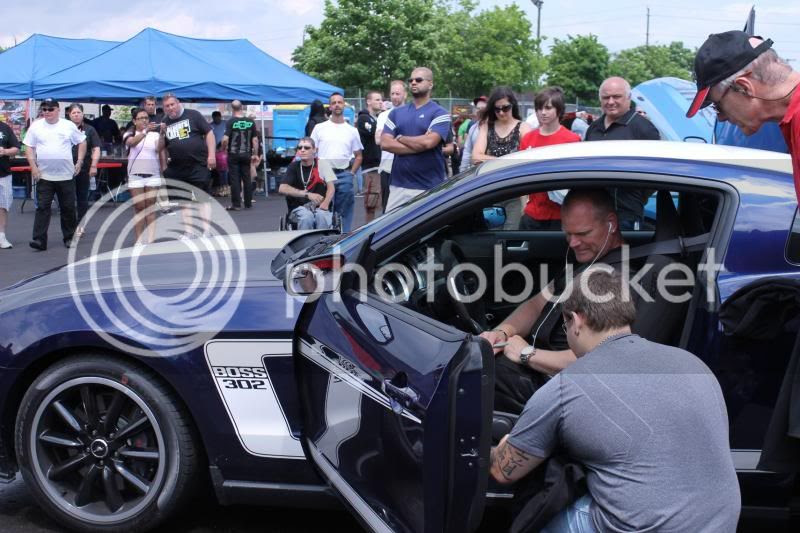 From the Ford blog:

Getting a large number of Mustangs to congregate in one area is a pretty special feat.

But to accomplish that and have charity involved? Well, that just makes it even sweeter. Such was the case recently at the sixth annual DaSilva Racing SickKids Charity Open House in Pickering, Ont.

The event is put on by Joe DaSilva’s auto shop, which specializes in Ford vehicles, namely Mustangs. The 2013 edition saw more than 1,500 people gather at the DaSilva Racing headquarters, along with over 150 cars. It managed to raise a whopping $18,000 for the Hospital for Sick Children – a vast increase over the $13,000 raised last year.

We were delighted to see plenty of familiar faces at the event.

Mike Holmes, the well-known Canadian contractor/TV host, arrived to the event in style in his Mustang Boss 302 to meet and sign autographs for fans. He shared how his own granddaughter spent time at SickKids and gave his thoughts to the crowd on the importance of supporting the hospital and the work they do.

Al Tucci, an announcer who’s better known as “The Voice” of the drag racing world, made a special trip from Chicago to work the crowd and MC the event. As well, Yves Ouellette was the DJ. (You might remember Ouellette as the Green Mustang owner, or from the Whitby, Ont., Cruise-Ins.)

Another familiar – and adorable – face was that of Weslee Brinn, whose inspirational story has been told on the Ford Blog in the past. The 4-year-old Mustang super fan, who suffers from a congenital heart disease, was selected by the DaSilva Racing team as their 2013 SickKids ambassador. In our opinion, they could not have made a better choice.

In addition to the $18,000 that was raised at the event, $2,000 in contributions was raised and donated to Weslee’s family. This generous act was something that touched DaSilva. He shared with us his reasons for hosting the annual event.

“People ask me why I do (the event),” he said. “I do it for friends of mine who’ve had their kids at SickKids. … We love raising money for them.”

It really was a perfect day filled with remarkable people who we’ve had the pleasure of getting to know over the past year on the Blog. We were thrilled to be part of such an event where generous, hard-working people came together to make a difference.

Check out the video and let us know your thoughts.


In the article above it mentions that Mike's own granddaughter (Emily, born October 2012) spent some time in the SickKids hospital. According to the Greater Toronto Area Mustang Club, the event was a huge success!

Thanks to all who supported the Sickkids show & shine!

The show was a huge success despite the rain showers throughout the day. We had about 150 cars and another 1500+ people come through the gates to participate in our Sick Kids Charity Open House. This year's total is over $19,000.00!!!! Plus an additional $2000 worth of charitable contributions directly to Weslee and his family.

On behalf of the DaSilva Racing Team A HUGE THANK YOU goes out to:
Everyone who came to support the show & made donations to Sickkids hospital.
Mr. Mike Holmes for taking time out of his day to participate in the show and say hello to some fans.
Uncle Bill for making the arrangements and keeping such great communication.
Al Tucci for coming up from Chicago to be with us in support of this amazing charity.
Weslee Brinn and his family for making the trip up from St. Thomas to be with us yesterday.
Sara Mercier, Matt Di Girolamo and Craig Silva from Ford Canada Blog for coming out to help support the Sick Kids Foundation. These guys have been keeping up with Weslee's progress and will continue to do so....
Zoo to You for bringing the wildlife experience to the children again this year.
Mike, Tony and Luke for manning the Big Boys Grille
Cozza Brothers for taking the time to pave the back lot so we could park far more cars in the yard...
All the Volunteers who helped make this show a success. We had all kinds of customers, family and friends here helping to make things run smoothly.
We would like to thank the GTAMC for a generous $1000 Donation!
Anyone else who we may have missed!
Fantastic day for a wonderful cause!
Be sure to mark your calendars for June 30th and our Troutwater cruise in for Lupus.

Joe, Matt, Rob, Reon, Val, Dylan, Chad, Pam, Nadia, AJ, Marino, Mike, Chris, Dave, Chop, Angel, Mark, Ralph, Shannon, Shawn and anyone else I may have mistakenly overlooked. Thank you all for a great show!
Posted by The Holmes Spot at 10:59 AM