This is a real treat. HGTV finally posted this to YouTube a couple of days ago (it's been on the HGTV Canada website for a while, but it's inaccessible to anyone outside of Canada).

This is the behind-the-scenes footage for the "Super Mike" promo that's been bounced around the internet for the last couple of weeks to advertise Mike's new show, which premiered in Canada on October 16. In it, they describe the concept behind the shoot, and why Mike's familiar face was of secondary focus.

(By the way, this would make a great 3x4 poster. I think the Holmes Group should really consider this as a merchandising idea.) 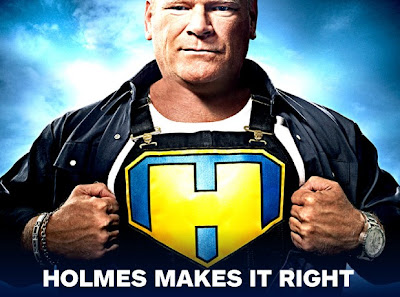