Mike Holmes has admitted on several occasions that he was not always there for his kids. While they were growing up, work often took greater president over being a dad, but he's certainly working hard to make up for lost time. These days, all three of his kids -- Amanda, Sherry, and Mike Jr. -- work at their dad's side, which gives Mike plenty of time to spend with his kids. They're a part of Mike's world, and that makes Mike a very happy daddy.

So what is Mike Holmes doing for Father's Day this year? Well what would you do if you had three kids, two grandkids, and this were your backyard? 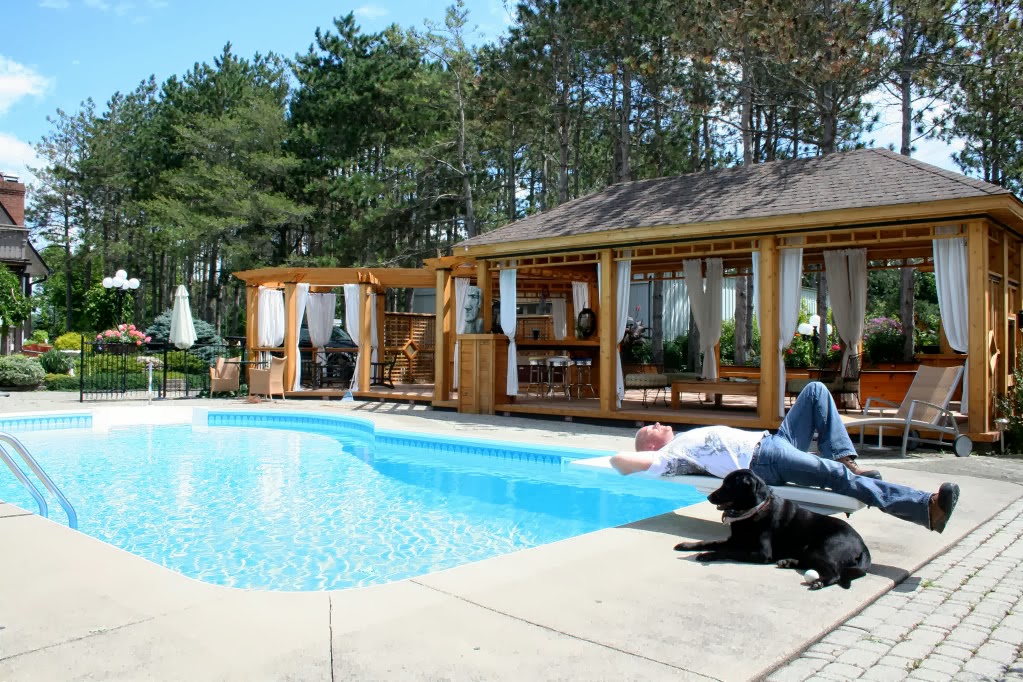 Yup, that's right. You'd have a pool party, and probably grill up some burgers and steaks too! On HGTV Canada, Mike Holmes writes this about his plans for today:

"This Father's Day all the kids (and grandkids) are coming to the house for a day at the pool! When they were younger I never saw them--I worked 7 days a week. But I'm making up for lost time--I even work with my kids now! It's like Father's Day every day. Best Father's Day gift? Sherry. She was born on Father's Day--I couldn't have asked for a better gift!" 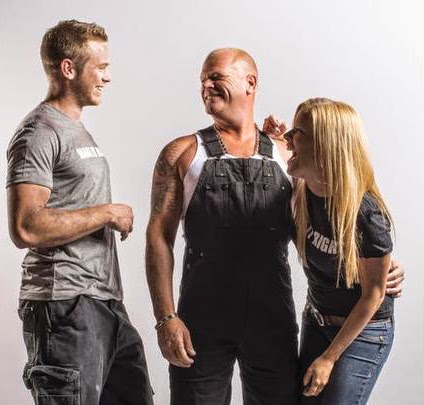 Amanda Holmes-Belanger Tweeted this "oldie but goodie" today in honor of her dear old dad! From the looks of it, I'd say this photo is circa 2000. 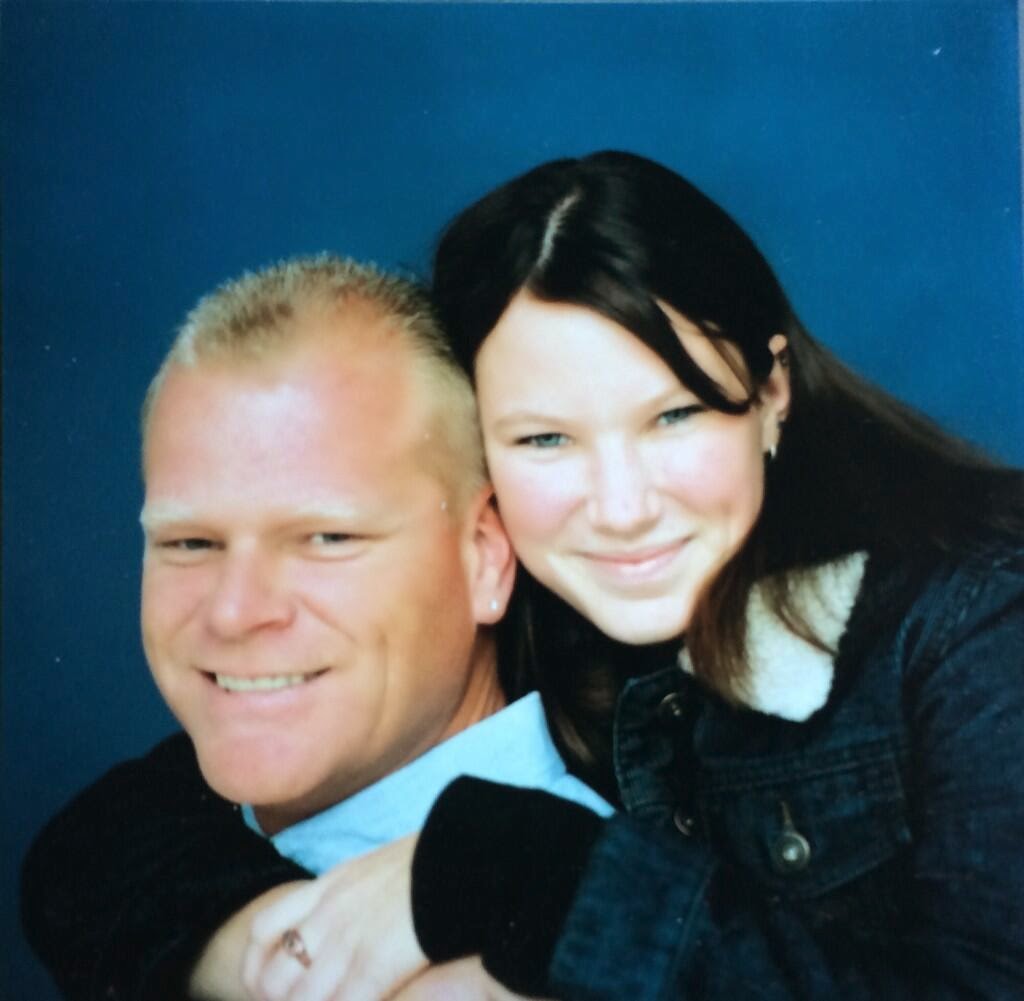 Happy Father's Day Mike from the Holmes Spot! Keep teaching dads to make it right!
From the Montreal Gazette:

Mike Holmes Jr., left, on a job site with dad Mike Holmes, who says watching his kids work and seeing the respect they have for the trades makes him proud as a dad.

Father’s Day is coming up, which makes me think about my kids.
As a dad I realize I’ve been lucky. I have the best kids in the world — they work hard, they’re smart and they’ve got big hearts. And all three of my kids work with me; two on the job site and one at the office, so I get to see them often.
That wasn’t always the case. When they were growing up I worked a lot, so I missed them. But now they’re part of that world.
It was natural — I brought them to work, they got to see what dad does all day, and as they got older they became interested. And it was the same thing with my dad — I’d follow him around the house, watch him work on the plumbing, fix something in the bathroom or kitchen, or see him work on our neighbours’ homes. It was amazing for me to watch as a kid.
That kind of inspiration is important. It triggers something inside you that says, “Hey, this is cool. I could do this — I want to do this.” Not too many kids get that anymore.
That’s why events that expose kids to different tools, different jobs, different skills are important — and they’re becoming more important as we start to see the effects of a skills shortage in this country.
Skills Canada National Competition wrapped up last week. This event promotes skilled trades, including careers in technology, to Canadian youth. It’s a national competition where kids put their skills to the test — in everything from mechatronics, aircraft maintenance and pipefitting to computer animation, baking and public speaking. If they win, they could compete at WorldSkills International.
Employment and Social Development Minister Jason Kenney was there, too. What does that tell you? That investing in skilled trades is an investment in this country’s future, and I believe the government is getting onside.
There has been a lot of talk this year about essential skills — those skills everyone needs no matter what trade they’re in. They include numeracy, oral communication, working with others, reading, writing, problem solving, digital skills and so on.
To me and anyone who works in the trades, these skills are a no-brainer — they come with the territory. But this is easy to forget if you’ve never been exposed to a skilled trade or don’t know anyone who works in the trades. Unfortunately, that can undermine the work and the dignity that goes with it.
Some people might think that working in the trades is a fallback career or anyone can do it. But I bet you those same people have never actually tried doing a trade, or they’ve never watched someone build a masonry wall or install an electrical circuit. Because the second you do, you learn very quickly that these jobs aren’t easy.
They require strategy or “thinking outside the box” — seeing the bigger picture. You need to know how different things connect, how they work and how one part affects another. You need good writing and communication skills so people you work with can understand you. Not to mention all of the other skills you need for your particular trade, such as how to get precise fits, make measurements down to the millimetre, and proper documentation.
When you work in the skilled trades you develop a full set of skills that are important for every job. The truth is not everyone can do it. It takes a real commitment to your craft and thousands of hours of dedicated work. As soon as you learn that, honour and dignity become part of it.
Having honour in what you do is what pushes you to put in the time, continue learning and improve all the essential skills that make you a better tradesperson ... one of the best. It’s the stuff my dad instilled in me — respect and pride in your work.
I honour my dad every time I pick up my hammer, and watching my kids work and seeing the respect they have for the trades makes me proud as a dad, too. It makes every day Father’s Day.
Watch Mike Holmes on Holmes Makes It Right on HGTV. For more information visit makeitright.ca.
© Copyright (c) The Montreal Gazette
Posted by The Holmes Spot at 9:15 AM