It was announced today on Mike's Facebook page that Dieter Kirshbaum AKA "Jundee" passed away. Dieter was a fan amongst fans, and also a super great guy. I met Dieter here on The Holmes Spot when be became a significant contributor to the discussions with his insightful comments. We became friends and pen pals through email. For most people in the Holmes fan community, Dieter was just Jundee, moderator of Mike's now-closed official forum. He was also someone I considered a friend, as well as a mentor. For the past year, we communicated through email about a variety of subjects, and he gave me a lot of insight about what it was like to work in Mike's office. He sent me a "Mike Holmes Care Package" for Christmas, which included seasons 1-5 of Holmes on Homes on DVD and some other swag items. He told me that I could rip them to my computer and then sell them on eBay because they were rather pricey on eBay. I told him I could never sell something that was given to me as a gift by a friend. And get this --- one of the DVD sets had a missing disc. I told him not to worry about it, that it was fine, but he wouldn't listen to me. He found the missing disc on eBay and sent it to me at a later date. I had no words, only "thank you."

He also sent me an appreciation certificate. I felt so honored that someone with so much wisdom and insight appreciated me. If only he knew how much I appreciated him.

When I met Mike Holmes in February this year, Jundee asked me to tell him hello, so I did. My parting words with Mike were "Dieter Kirshbaum says hello!" Mike smiled like I've never seen him smile before and said "I love Dieter," I nodded my head and said "I know you do. So do I!" I relayed the story back to Dieter and he was so excited to hear it. Mike meant a lot to him. He means a lot to me too.

I knew he was sick. I have a Father's Day card sitting in a drawer with his name on it. It just needed a stamp and to be mailed. 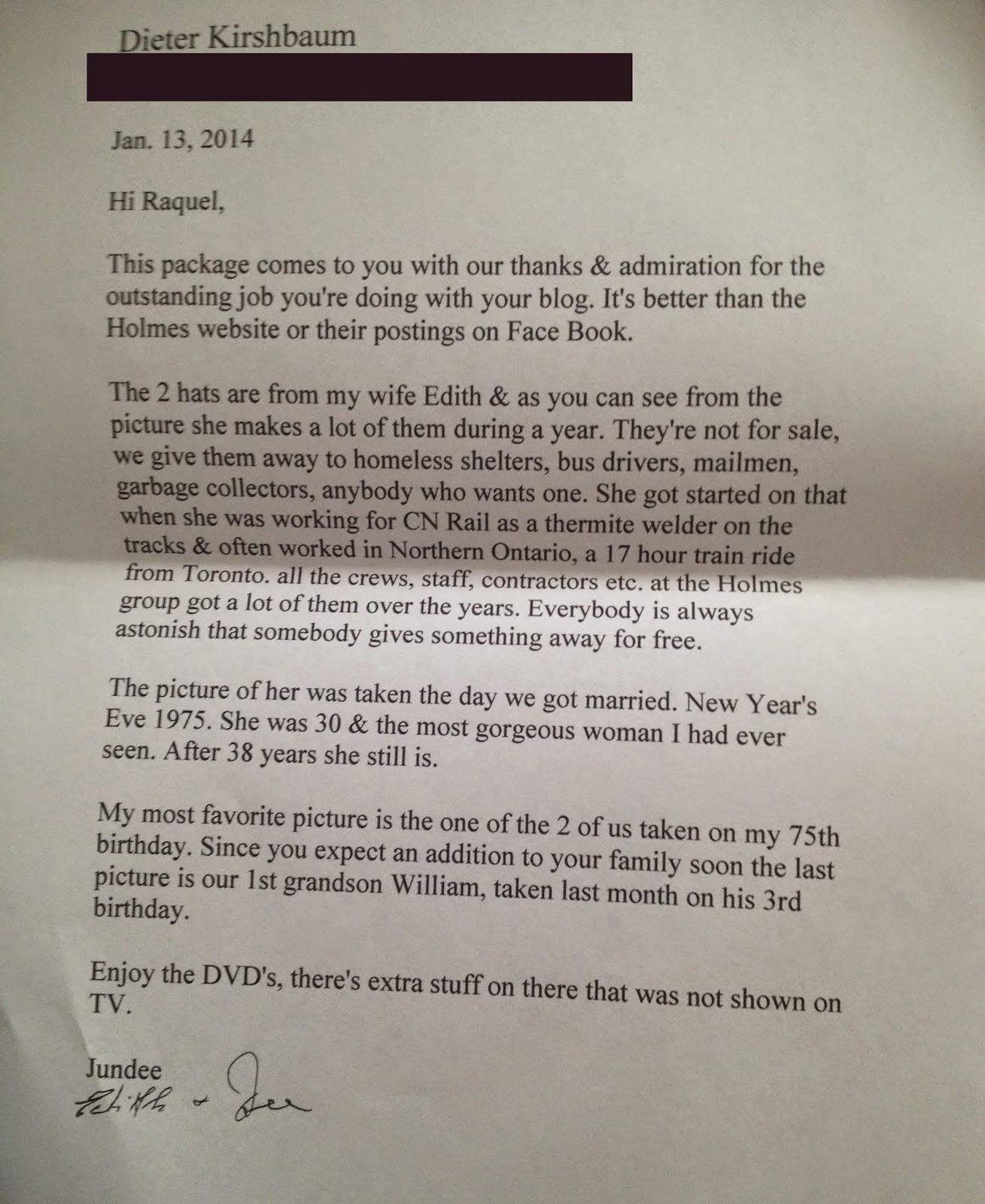 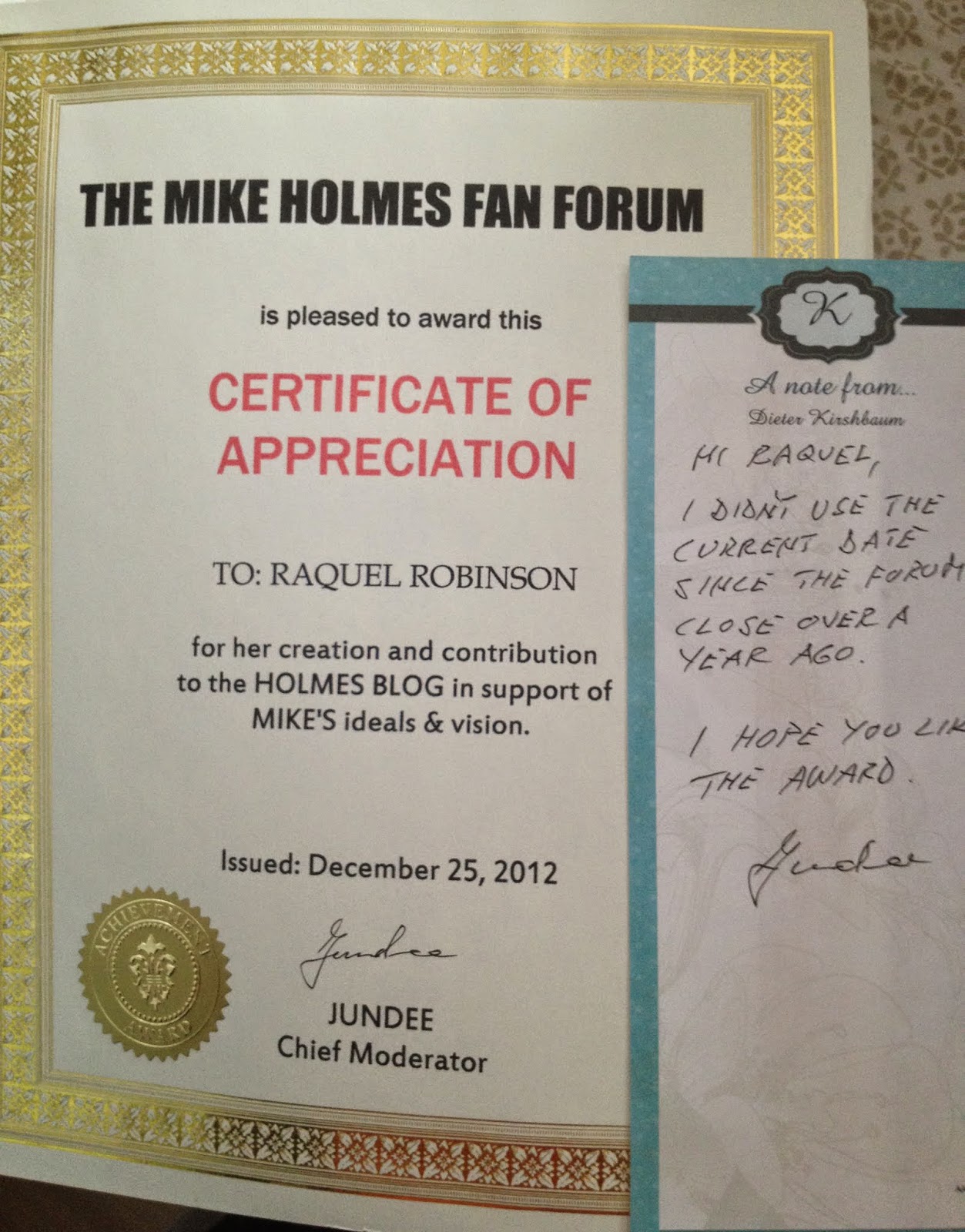 Jundee was very proud of this photo. It meant a lot to him: 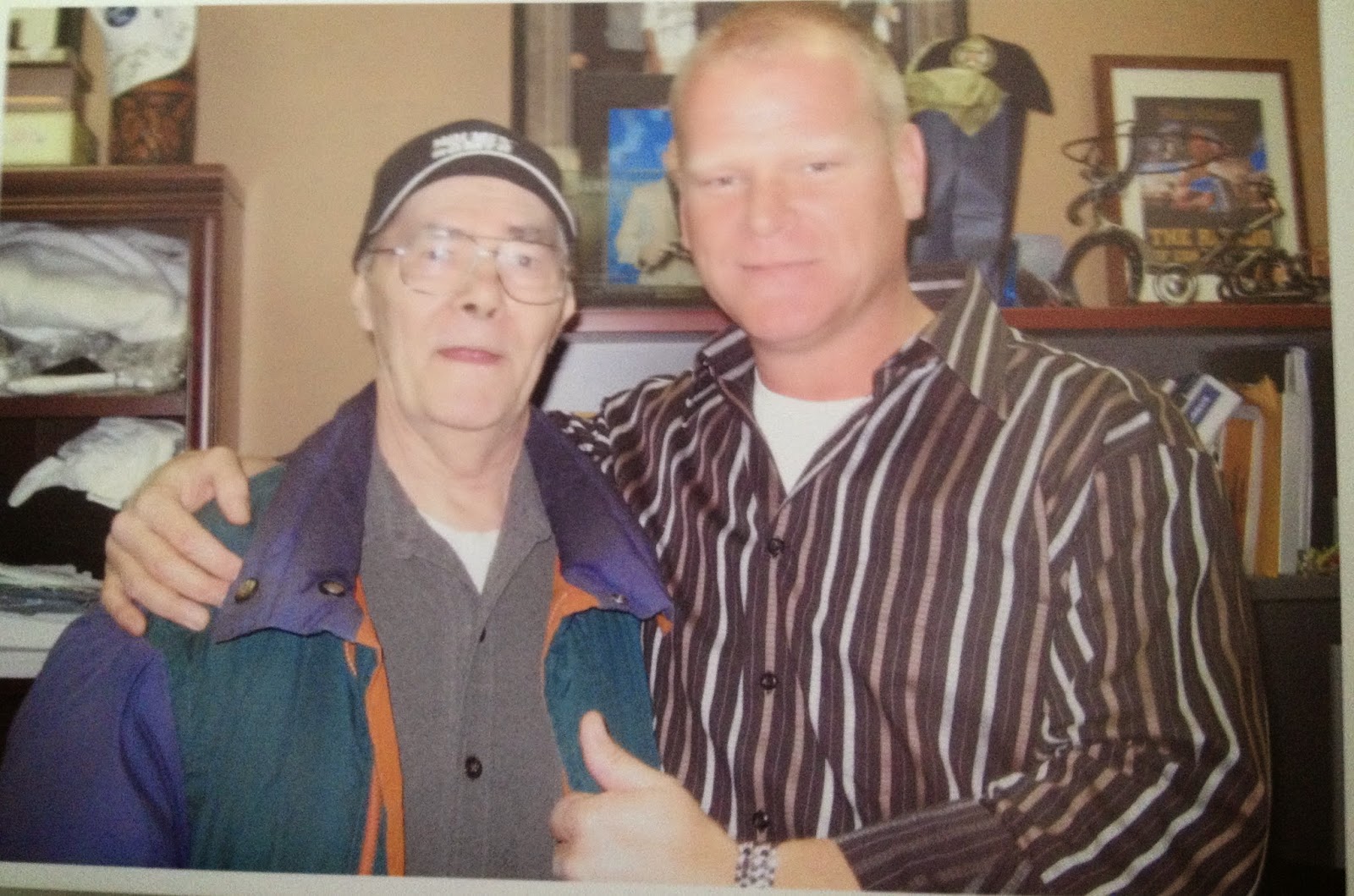 I can't believe that I will never post something on this blog again, and see one of his comments. I can't believe that I'm never going to get another email asking if Mike is still filming episodes of his show or if I had heard this piece of news or that piece of news. My deepest sympathies to Dieter's family, his wife and kids and grandkids, and to those who knew him much better than I did.

I have some sad news: Longtime fan and friend, Dieter Kirshbaum (aka Jundee) has passed away. Jundee became a fan of Holmes on Homes during the second season. Since then he's been a big help and devoted volunteer, supporting the Holmes Foundation, and was the forum moderator. In 2008 he even compiled a binder with comments from fans around the world!
Our prayers and thoughts are with Jundee and his family. We lost one of the good ones! He will be missed.

I would like to take a moment to say goodbye to Jundee(Dieter Kirshbaum), who passed away yesterday.

When I first started with Mike, Jundee was already a permanent fixture with the Holmes group. He was more than a fan, he ran and moderated Mike's fan forum for well over 5 years, completely voluntarily, he was an integral member of the team. He was a lovely dedicated man who loved Mike, the show, the crew, and everything that we stood for and were trying to do.

He attended every local home show that Mike made an appearance at. I would always see he and his wife, with a gift in hand for Mike, showing their support. He cared as much about the people on the show as the show itself.

After I left the show last year Jundee reached out to me and we began corresponding regularly. He was very supportive and encouraging, he wasn't merely a mentor and friend, he was also a father figure. It was truly an honour and a pleasure to have known him.
He had no intention of slowing down, he assured me that as soon as I had a show on the air, I would also have a fan forum. Thank you for your support, words of wisdom, input, and encouragement. I am forever grateful.

I will always remember you sitting in the front row at home shows, with your arms crossed, a big smile and a present at your feet. I'll miss you big guy.