I live my life as a Mike Holmes blogger in sprints. Sometimes there's nothing going on and I'm scouring the four corners of the internet for content. And then there's today, where a huge amount of varying content just got dumped at my feet all at once, and I'm racing to sort it and post it all while it's all still relevant. Today's blog entry will be another mish mash potpourri edition of varying updates to hopefully get us all caught up.

I am happy to announce that after a week of searching through news racks, the internet, and bookstores, I have finally found and obtained a copy (or two) of Make It Right, Mike's 10th anniversary special edition magazine that came out April 22 across the Canada and the US. If you are still having problems finding a copy, I found mine at Sam's Club (but NOT Walmart). I know of others who have also found the magazine at Sam's Club, so if you have one nearby, it's worth a visit. And if you don't have one nearby, pack a lunch and make a road trip out of it (although I would call first just to make sure they had it). In summary, I LOVE this magazine, it's packed full of information and pictures, totally a fangirl's (or fanboy's) dream come true. If you love Mike and want to know what he's all about, you're going to want to pick up a copy. I'm still scouring, reading, and wallowing in all the lovely pictures. I will no doubt be reviewing the magazine in an up and coming edition of the Holmes Spot, so stay tuned. 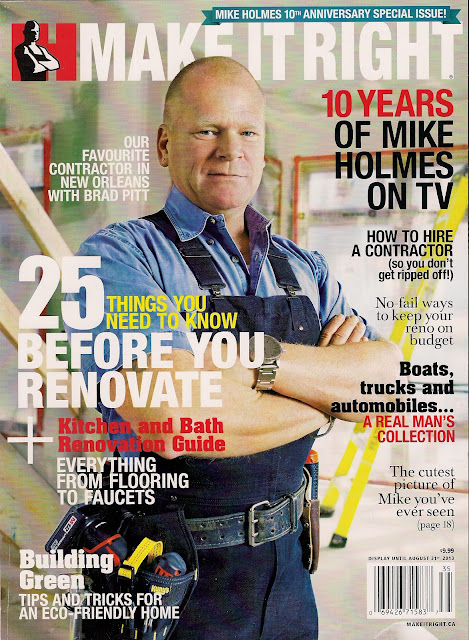 It's so weird I haven't heard much about this on Mike's website, or anywhere for that matter, but Mike's annual ATV ride fundraiser for the Holmes Foundation is just around the corner. Last year's ride was very publicised, and there were places to donate money to support the riders. This year, I see very little of that, and the ride will take place in a week and a half on May 11 at the Horseshoe Resort in Ontario.


Here's a flier for the event, which can be found on the event's official website:

and last but not least...
TOPIC #3: Radon
Yesterday, this photo was posted to the 3M Filtrete brand air filters Facebook page. Mike Holmes has been an official spokesperson for the brand since around February of this year when he did a national television commercial and radio ad campaign for the company.

The graphic reads "'One out of every 15 homes has dangerous levels of radon, according to the EPA. Check your home's radon levels by testing regularly with short-term test kits.'  - Mike Holmes, America's most trusted contractor."
It's always a treat to see Mike's smiling face anywhere, even in front of a big yellow radon warning sign. Mike Holmes has been an advocate of testing for radon for years. Last year, Mike Holmes wrote a short piece in his syndicated newspaper column about the dangers of radon gas, and how important it is for people to regularly test their homes, especially if they live in an area that is susceptible to radon poisoning. I never got to post this particular article because so much other stuff was happening at that time last year, such as the 6th Annual Holmes Foundation ATV Ride and Mike being chosen as Honorary Safety Ambassador for Building Safety Month that it fell through the cracks. Here's the article, from May of 2012.
From the National Post:

HandoutMike Holmes holding radon test kit, which homeowners can use at home.
Something I haven’t spoken about in a while is now suddenly a hot topic again. What’s everyone asking about? Radon. Go figure.
Most people are scared of radon. The truth is not a lot of people know what it is. They usually think it’s a soil problem. But it’s actually a gas problem.
Radon comes from uranium in the ground. Uranium is everywhere. It’s in all kinds of soil. And when it breaks down, it produces a radioactive gas that is odourless, colourless and tasteless. This gas is radon.
When radon gas is released in the air outside, it gets diluted. But if it finds its way into your home it can accumulate. That’s when it becomes dangerous.
How does radon come into a home? Through unfinished floors, pipes, windows, sumps, cracks in foundation walls and floors, or even through foundation walls. Remember, concrete is porous. Radon is a gas, so it can come through the tiny holes in a home’s foundation walls.
Being exposed to high doses of radon over a long period of time is a huge health risk. According to Health Canada, radon is the second-leading cause of lung cancer after smoking. In fact, 10% of all cases of lung cancer in Canada are caused by radon.
Is this serious? Let’s look at the facts: It’s estimated 2,000 people die every year in Canada due to radon. Think that’s bad? In the U.S. it’s about 20,000.
Between 2009 and 2010, Health Canada did a cross-country survey. Turns out, about 7% of Canadians are living in homes with radon levels above the guideline.
How much radon is too much? It used to be 800 Bq/m3 or 800 units of becquerels per cubic metre. (Becquerels are used to measure radioactive concentration.) Then in 2007 it was lowered to 200 Bq/m3.
The survey also showed different parts of the country have different levels of radon. For example, Manitoba, New Brunswick, Saskatchewan and the Yukon had the highest percentages. Nunavut and Prince Edward Island had the lowest. Anywhere uranium is mined, you’re going to have higher radon levels.
But regardless of where you live, there’s no way of knowing if you have a radon problem — unless you test for it. One house can have radon levels next to zero. You go to the house next door and the levels can be off the charts.
These levels also fluctuate. Depending on the weather, humidity, the home, or the time of year, radon levels will be higher or lower.
For example, during the winter we keep our windows and doors shut. This lets radon accumulate in the home. That’s why radon levels tend to be higher in the winter. And for that same reason, it’s also the best time to test for it.
There are radon test kits homeowners can buy at big box stores or from organizations like Pinchin Environmental. But testing can be tricky.
There are specific requirements when you test for radon. For example, you need to place the detector in the lowest part of the house that’s occupied for at least four hours a day. It can’t be anywhere where there’s humidity, such as the kitchen or bathroom, or near any vents. There can’t be any objects around it. It needs to be a certain distance away from interior walls, exterior walls, below the ceiling and above the ground. If you don’t follow these instructions carefully, you mess up the test.
That’s why there are professionals who know how to measure for radon. Who’s a pro? Someone who is certified by the National Environmental Health Association (NEHA) or National Radon Safety Board (NRSB).
There are short term and long term tests for radon. Short term is usually over two to seven days and long term is anywhere between one to 12 months. The longer you test, the better. Health Canada recommends a minimum of three months. But what if there is a radon issue? Should you be waiting for months to find out?
Your best bet is to do a short-term radon test in closed conditions. That means keeping windows and doors shut as much as possible — some homeowners do it while they’re away on vacation. And if the results show you’ve got radon levels higher than 200 Bq/m3 call in a pro to verify.
If you have a radon problem, it can cost $1,500 to $3,000 to fix it. You need to call in a contractor who has experience in dealing with radon mitigation. You need someone who is certified in radon mitigation by the National Radon Proficiency Program.
Putting a cap on sump pumps and sealing foundation cracks helps. But the most effective method is drilling a hole through the basement floor and installing a pipe with a fan. This process is called de-pressurization and it draws the gas from the ground to outside the home.
Is radon something we should think about? Yes. Should we panic? No. Is it more serious than something like mould or asbestos? As far as I’m concerned, they’re all bad. If you have high levels of radon in your house, it’s bad. If you have asbestos or mould in your house, it’s bad.
Bottom line: Whether it’s mould, asbestos or radon, any time our health or our family’s health is compromised we need to be concerned.
Catch Mike in his new series, Best of Holmes on Homes, Tuesdays at 9 p.m. on HGTV. For more information, visit hgtv.ca. For more information on home renovations, visit makeitright.ca.
Posted by The Holmes Spot at 10:22 AM