Last night, HGTV Canada premiered a brand new episode of Holmes Makes It Right, Mike's new show and follow-up to Holmes on Homes and Holmes Inspection. The episode was called "Labour of Love." Here's a summary of the episode from HGTV Canada:

Mike Holmes is called in to teach some valuable lessons in construction when a high school student passes away suddenly, and his shop teacher and classmates decide to help the family with some renovations as a school project.

If you're Canadian and you missed last night's episode, you can view it on the HGTV Canada website. If you're from the US, you still have a long wait ahead of you before HGTV picks the show up. A couple of weeks ago, I read on what appeared to be a credible entertainment blog that the DIY network has plans to pick up the show in August 2013, almost a full year after the show's premiere on HGTV Canada in October 2012. Despite this, after Mike's 10th Anniversary Special aired on HGTV Canada last week sans disappointed fans in the US, Mike Holmes posted on Twitter and Facebook this message, geared specifically towards his US fans:

To my fans in the USA - new episodes are coming to DIY Network and HGTV. We are just waiting on an air date! Thanks for all of your support - and patience! You'll know as soon as we do!


The post received over 3,000 "likes," which from my observation is a record number for any individual post on the Holmes Facebook page. Reading some of the comments, it appeared to me that people thought that this was pretty good news. "Good news at last Mike!!!" commented one fan. "Best news I've received all day. Great!" commented another. There were hundreds of comments, all sharing these sentiments. Unfortunately, I am very sceptical at the proverbial bone that Mike threw out to his US audience. In fact, I think this post was a little... *cringe*... disingenuous. I think if the Holmes camp was truly honest with their US audience the post would have read something like this: 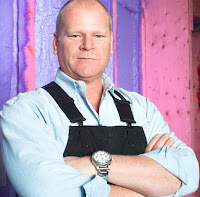 SORRY GUYS... WE HAVE NO CLUE WHEN THE SHOW IS GOING TO AIR IN THE US. IT COULD BE NEXT MONTH, NEXT AUGUST, NEXT YEAR, OR MAYBE EVEN NEVER. WE JUST CAN'T TELL YOU, BECAUSE WE DON'T KNOW OURSELVES. IN THE MEANTIME, HERE'S SOME YOUTUBE CLIPS TO MAKE YOU FEEL SOMEWHAT INCLUDED. YAY USA!!! THANKS FOR ALL YOUR PATIENCE, AND PLEASE DON'T GET BORED WITH ALL THE HOH RERUNS ON DIY. I HAVE A NEW BOOK OUT IN THE US ABOUT KITCHENS AND BATHROOMS.

Ok, so maybe that was a little snarky and mean. But it's more...*cringe*... honest than what was posted on the night of the special.

In the meantime, enjoy this YouTube clip from the Holmes Makes It Right episode "Labour of Love" entitled "Construction Class Act." Hope it makes you feel included.