For those who don't know, Sherry Holmes is Mike's incredibly talented and beautiful daughter, who has been working at her father's side since 2008 when Mike and the crew lent a hand in New Orleans. As a woman in a profession dominated by males, Sherry recognizes that respect is a tough thing to earn. It was announced yesterday in the Vancouver Sun that Sherry will be taking part in the West Coast Women’s Show in Abbotsford, British Columbia at the Trade and Exhibition Centre as one of several celebrity guests. While the show is geared toward things that women typically love to do (i.e. shopping, eating, and drinking wine) Sherry will be featured on the "Do-It-Herself Home Improvement Stage" on Stage 2. From the schedule, it appears that Sherry will be making several appearance on Saturday and Sunday, October 26 and 27, 2013. If you're interested in attending, you can buy your tickets online here!

From the Vancouver Sun:

Following in her father's footsteps 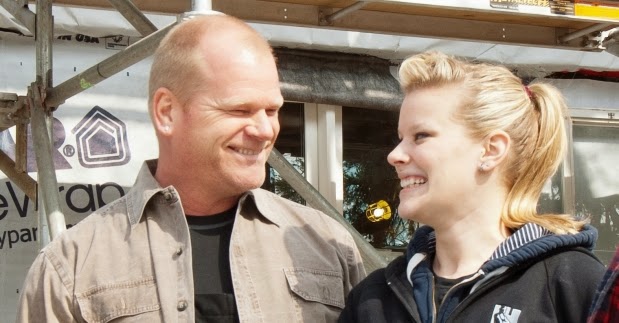 Television handywoman Sherry Holmes says she doesn’t like stereotypes.
That’s one of the things that motivated her to follow in her famous father’s footsteps and to slip on her own tool belt.
“There aren’t a lot of women in the trades,” she says, speaking by phone from her home base in Toronto, on a short break while filming the HGTV show, Holmes Makes it Right.
“As a woman coming into a male-dominated industry, you have to work twice as hard,” she says. “People will always underestimate you.”
But she says she enjoys the challenges.
“It is worth it. It is empowering,” she says. “I like being able to swing a hammer. I think it’s cool.”
And, she says, she’s excited to share her experiences at the upcoming West Coast Women’s Show in Abbotsford at the Trade and Exhibition Centre, as one of several celebrity guests.
“Expect me to be nervous,” she says, laughing. “I’m very shy.”
It took Holmes about three years to feel comfortable on camera, she says, “to even say anything.”
Now going in to her fifth year working with her celebrity home-fixer dad, Mike Holmes, her brother and a multi-talented construction crew, she says she’s enjoying herself a great deal on and off the air.
“Every day is different,” she says. “I really enjoy working with my hands. It also makes me feel stronger.”
Led by her dad, the team goes beyond residential homes to “take on disasters that would make other contractors run,” says HGTV’s website, including some heart-wrenching scenarios that make for great television.
One of her feel-good favourites?
“We built a kid’s castle,” she says, of an episode where the team crafted a Toronto playground after it was burned down. “It was phenomenal.”
Every episode introduces them to a fresh chance to use their skills to help new people.
“Right now? We’re actually tearing apart a basement that’s flooded,” she says of her current workday, adding: “We all get involved.”
Growing up, she says, she didn’t think she’d be in the family business.
“I was pretty sure I wasn’t going to be in construction at all,” says Holmes, adding she thought she’d become a veterinarian. “I never thought I’d be involved in it. Never, ever.”
At the same time, she says, she recalls how at age four she enjoyed helping her dad build a Barbie house, nail by nail. They even painted it together.
“He’d have to explain everything,” she says. “He’s very into teaching things.”
She says anyone can try their hand at DIY, if they start with simple projects and the right tools.
Her must haves? An impact drill, a hammer, a level, a pencil, a multi-bit screwdriver and a measuring tape.
“The best way to start is with the smaller things,” she says, like hanging a photo on the wall correctly and securely.
Check for studs in the wall first, she says, and then use your measuring tape and level to determine where to hammer the nail.
And whatever you do, she says, measure twice.
For more information on the West Coast Women’s Show, Oct. 25, 26 and 27, and full event schedule, visit.westcoastwomen.net
© Copyright (c) The Vancouver Sun
Posted by The Holmes Spot at 9:30 AM