Since June, when the province of Alberta sustained tremendous damage from a severe storm which flooded and destroyed numerous homes, Mike Holmes has been a frequent guest in the Calgary community of High River. Taking up the role as an advocate for the displaced, Mike has pledged his support, time, talent, and resources to helping rebuild better and stronger than before. Back in July while speaking to a crowd of affected residents, Mike indicated that his show Holmes Makes It Right would be helping one family rebuild their home. True to his word, it was announced in the Calgary Herald this week that Mike and his crew were in the community of High River not too long ago filming an episode for the show entitled "High Water." The hour-long episode will feature one family's efforts to clean up after the devastating flood. According to a different news article by the Airdrie City View, the episode will air this month on October 29, and will sing the praises of Holmes Approved Builder Lifestyle Homes.
For more information, please refer to previous Holmes Spot blog entries:
Holmes on High River
Mike Holmes in High River - Video
Mike Holmes Visits High River - Pictures
Holmes to the Rescue!
Rebuilding After the Flood


(Holmes Spot random commentary... check out the file photo of Mike from the Calgary Herald. Anybody else notice they airbrushed out Mike's tattoos? I know he's wearing a longer sleeved shirt, but even so, the lower portion of the tattoos should still be visable. Just an interesting observation.)

From the Calgary Herald: 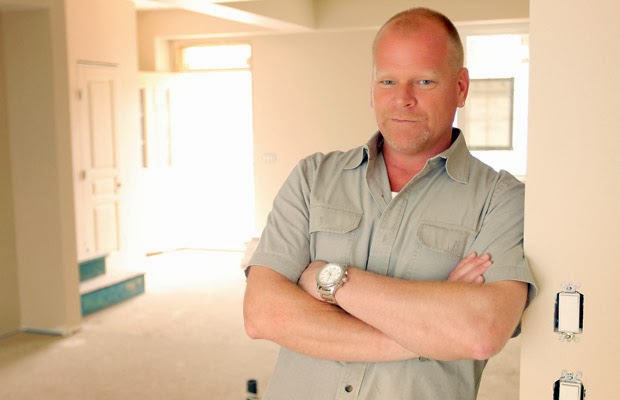 TV renovator Mike Holmes.Photograph by: Files, Calgary Herald
After the waters receded this summer following the floods through southern Alberta, many residents were left to clean up and try to make some sense of their homes and workplaces.
In High River, one of the hardest hit communities in the province, many homes need to be torn down and replaced.
Contractor Mike Holmes recently brought his crew to the community, filming an episode of Holmes Makes It Right that follows one family’s efforts to clean up after the flood.
Their home was built by Lifestyle Homes under the Holmes Approved Homes program, which involves an independent documentation of the building process along with meeting certain standards.
“It’s so jam-packed with information: footage, aerial footage and floods, still pictures, stories and tears — grown men crying like crazy,” says Ryan Armstrong, general manager of Lifestyle Homes, about the content and emotions captured in the episode, titled High Water.
“It’s really good information for people who are going through the remediation process themselves. I know of a lot of people who haven’t even started yet.”
The hour-long episode covers information including mould remediation, air quality tests, what parts of the electrical system should be replaced, and whether hot water tanks and furnaces need replacing.
“It talks about the pink elephant in the room — the government — and insurance companies, and what this family’s challenges were,” says Armstrong.
The show also looks at how certain types of building materials fared in the flood, and examines using materials such as coated lumber and certain kinds of insulation.
“If you’re near a river and there’s the potential of (flooding) happening again, you can reduce your property damage considerably” by using certain materials to rebuild with, Armstrong says.
“We were able to prove that utilizing coated lumbers and different building techniques actually reduces your property damage in the event of a flood.”
The Holmes team found there was far less penetration of moisture into coated lumber than regular lumber, and it was far easier to clean up. Triple-pane windows didn’t blow in, stronger foundations held, and the moisture-resistant drywall helped reduce damage.
“It was a really good test for the specification,” says Armstrong. “When I put the specification together, I never really thought that we’d have to flood test it. I was concerned about fire, mould and mildew. I never expected to flood test it, and it passed with flying colours.”
Fortunately, for this family, they were able to get back on their feet after the flood.
“This family of four had been out of their house for 120 days, and they get their house back at the end, so it’s a great story at the end,” Armstrong says.
RAISING THE BAR
Holmes Approved Homes is a program that recognizes builders for using methods and materials that contribute to a sustainable and durable home that exceeds industry standards.
This includes eight site visits during construction.
Four of the visits include filed views by an inspector certified by TV renovator Mike Holmes.
For more information, visit holmesapprovedhomes.com
DID YOU KNOW?
Holmes Makes It Right’s episode, High Water, is slated for 10 p.m., Oct. 29 on HGTV.
Visit hgtv.ca
© Copyright (c) canada.com


From the Airdrie City View:

Oct 24, 2013 10:13 am | By Matt Durnan | Airdrie City View
Local business owner Jerrod Iverson will appear on renowned Canadian contractor Mike Holmes’ television program Holmes Makes it Right this coming week.
The episode will air on Oct. 29 and will feature Iverson’s work on the flood-affected homes in High River that were devastated by record flooding in June.
Iverson’s company - Iverson Inspections - was hired to conduct air quality tests at four properties in the Montrose area in High River nearly four months ago after the town was ravaged by flood waters in late June.
The connection to Holmes’ television program was made because the four properties that Iverson was working at were Lifestyle Homes, which is a Holmes Approved homebuilder.
“Lifestyle (Homes) does a background check on the companies they hire for this work so they’re making sure that they’re not bringing in some unknown company,” said Iverson.
“They made sure that my credentials were in order before bringing me in.”
Iverson spent about four hours filming with the crew at Holmes Makes it Right while he conducted air quality tests to check the flooded homes for mould spores.
The work itself wasn’t anything new to Iverson as he has been doing this work for over five years. His home-based business in Airdrie has been open for a little over two years and he said he was thrilled with the promotion his company gained through appearing on Holmes Inspection.
“This is a big step for my company, it’s always nice to be recognized and to get a bit of promo,” said Iverson.
“Lifestyle Homes is a reputable company and Mike Holmes is a respected and recognized person in this industry.”
While in High River, Iverson wasn’t just working on set with the Holmes Inspection crew; he had other non-televised jobs, including a 45-unit condo.
His company is based out of Airdrie and takes jobs all over Southern Alberta within a 200-kilometre radius.
For more information, visit www.iversoninspections.com
Posted by The Holmes Spot at 8:03 PM