May is building safety month, and Mike Holmes is promoting awareness by posting articles on his website, Facebook, and Twitter accounts about how to maintain a healthier, safer home. Today, Mike posted an article linked to his official website regarding fire extinguishers. When should we use fire extinguishers (as opposed to or in conjunction with calling the fire department)? How many should we have in our home? Where should we keep them? These are questions that Mike addresses in detail in his article, "Fire Extinguishers: A Safety Tool For Every Home." Mike also explains the differences between the three basic classes of fire extinguishers and informs readers of how and when they're used. These are important factors to consider when choosing extinguishers and their placement in your home. Once you have the right extinguisher in your home, it's important to maintain them and have them inspected at least once a year by a professional. However, just as we periodically check the batteries in the smoke alarm, it's important to perform periodic checks on your fire extinguishers to make sure they are operating optimally at all times.

When emergency strikes, it's important to have a game plan. Fire extinguishers are a big part of that game plan and an important piece of safety equipment that no home should be without.

Fire extinguishers should be installed in plain view, beyond the reach of children, near an exit route and away from stoves and heating appliances. Have them handy on every floor of your home, including kitchen areas, the garage/workshop, and at the top of the basement stairwell. 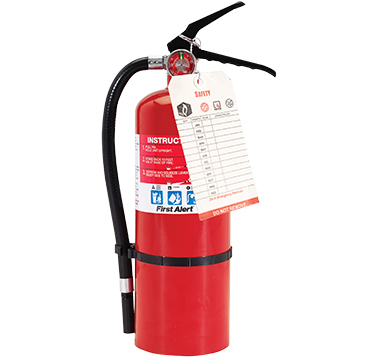 
USING A FIRE EXTINGUISHER
Remember “P-A-S-S” when using a fire extinguisher to contain or put out a small fire in your home: