May is building safety month, and being that making it right means making it safe, Mike Holmes has been Facebooking and Tweeting various safety article from his website. Today, Mike Holmes posted an article pertaining to an odorless, colorless radioactive gas that kills thousands of people every year: radon. Where does radon come from? Long answer short: radon comes from uranium which is present a variety of soils and natural stones, such as granite. When uranium breaks down, it emits radon. This toxic gas can make its way into one's home where it can accumulate and potentially be a major health hazard. To find out if radon is risk factor in your home, testing is available. To read more about radon and how to detect and mitigate it, as well as other resources pertaining to home safety, visit MakeItRight.ca.

Uranium is everywhere in the ground and in all kinds of soil, and when it starts to break down it creates a radioactive gas that is odourless, colourless and tasteless. This gas is radon.

When radon gas is released into the atmosphere, it gets diluted. But if it finds its way into your home it can accumulate, which is when it can become dangerous.

Being exposed to high doses of radon over a long period of time is a major health risk. According to Health Canada, radon is linked to about 16 percent of all lung cancer deaths in Canada. That makes radon the second leading cause of lung cancer after smoking. 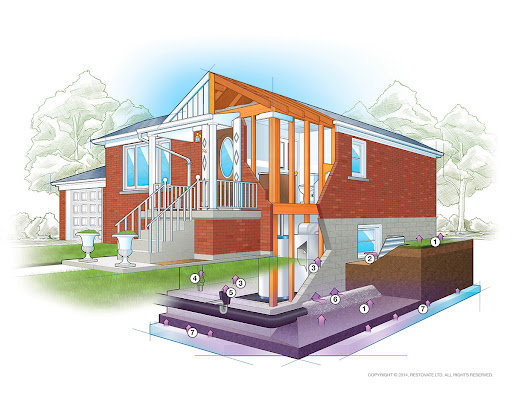 Some granite countertops emit radon. This is because granite is mined from the ground, where uranium and radon are also found.

Radon is measured in becquerels, which is a unit used to measure radioactive concentration. The Canadian guideline for radon dictates that a home should not contain more than 200 Bq/m3 or 200 units of becquerels per cubic metre. Before 2007, the national guideline for radon was 800 Bq/m3.

Between 2009 and 2010, Health Canada did a cross-country survey that revealed about 7 percent of Canadians are living in homes with radon levels above the guideline.

The survey also revealed that different parts of the country have different levels of radon. For example, Manitoba, New Brunswick, Saskatchewan and the Yukon had the highest percentages of radon, whereas Nunavut and Prince Edward Island had the lowest.

Regardless of location, the only way to know if a home contains dangerous levels of radon is to test for it. One house can have radon levels next to zero while the house next door can have levels that are off the charts.

Radon levels also fluctuate depending on the weather, humidity, the home’s construction and the time of year. For example, winter is the best time to test for radon because windows and doors tend to be kept shut during most of the season, which allows any toxins in the home to build up. This provides a good reading on indoor air quality and radon levels a household is exposed to.

Homeowners can purchase radon test kits themselves, but testing for radon can be difficult. For example, radon detectors must be placed a certain distance away from interior walls, exterior walls, below the ceiling and above the ground. Do it the wrong way and the test results can be compromised.

Homeowners are encouraged to hire a professional to test for radon, such as a home inspector certified by the Canadian National Radon Proficiency Program (C-NRPP), in order to ensure accurate test results.

Due to the fluctuations in radon levels, long-term testing provides a more accurate indication of a home's average year-round radon levels. For this reason Health Canada recommends long-term radon testing.

Specific requirements must be followed when testing for radon. For example, all windows and doors must be kept shut as much as possible during the full duration of the test. This is why some homeowners choose to have their home tested while they are away.

In addition to maintaining closed conditions, the detector must be placed in the lowest area of the house that is occupied for at least 4 hours a day. It cannot be placed near any vents or where humidity is likely to occur, such as in the kitchen or bathroom. There also shouldn’t be any objects around the detector, which could obstruct its reading.

GETTING RID OF RADON

Reducing radon levels in a home can cost anywhere between $500 and $3,000. Some solutions involve installing a cap on sump pumps, or boosting up the ventilation in the home with something like a heat recovery ventilator (HRV), or sealing cracks in the foundation and around pipes and drains. Sometimes these solutions are enough, but other times they’re not.

The most effective way to reduce radon levels in a home is through a process called sub-slab depressurization. It involves drilling a hole through the basement floor (concrete slab) and installing a pipe with a fan. The fan draws radon gas from the ground and expels it through the pipe to a vent, usually located on the roof of the home.

If your home requires radon mitigation, make sure you hire a contractor who is certified by the Canadian National Radon Proficiency Program (C-NRPP) and who has plenty of experience reducing radon levels in residential construction.

DID YOU KNOW...
Ontario Tarion now covers radon remediation for the full 7 years of coverage. The push is for more new-home warranty programs to do the same.