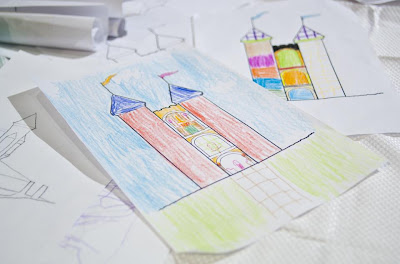 Tomorrow's new episode of Holmes Makes It Right is a very special one, and I'm sure when I finally get to see it in 2013, it will be just as awesome for me as it will be tomorrow night for everybody in Canada! In May of this year, Mike Holmes became involved in rebuilding the Jamie Bell Adventure Playground, which was burned down by an arsonist in March. The playground was a Toronto mainstay, and many of the residents felt the need to rebuild it bigger and better. That's when Mike stepped in, lending a hand and his name to the effort. He met with city planners and community members, as well as the children who would be using the park, asking for input. The kids told Mike they wanted castles and lots of slides. Parents told Mike they wanted safety, with plenty of head clearance so they didn't bump their noggin chasing after their little ones. What they got was an experience that would create many memories and strengthen community bonds.

In July of this year, Toronto residents came together despite a nasty heat wave and gave their all to help rebuild the playground. Mike and his crew were there to direct the numerous volunteers and professionals who came out in droves to not only meet Mike and his crew, but also to strengthen their community through service. All of their hard work and effort was filmed for tomorrow's new episode of Holmes Makes It Right, entitled "Building Castles."

I got the chance to interview someone who was there during the community build day that took place in July. Belinda, who came out to Toronto with her family, had deep roots in the community and felt the need to preserve the park that she loved so much. Much thanks and gratitude for her willingness to share her experiences!

The Holmes Spot: Why did you get involved with the Jamie Bell Adventure Playground rebuild project?
﻿
Belinda: I got involved with the Jamie Bell Adventure Playground community rebuild because I wanted to give back to a community that has given me so many great memories. Growing up in Toronto, I used to go to High Park every summer. Giving back, was the right thing to do. I wanted to make sure kids now and in the future are able to have the same type of memories that I have. My kids wanted to get involved too, because they've been taught that if someone needs help, you don't turn your back on them. Allowing them to be part of it too, just reinforced that lesson.

The Holmes Spot: What was your experience like during the community build day in July this year?
Belinda: It was a lot of hard work, especially with the heat, although it was a little cooler that day than what it had been all week, but it was also a lot of fun. We had cameras following us around all day, even getting in our way at times, but because we were busy, you forget that they are there....except for when they get right up in your face....like when the kids and I were re-painting the old part of the castle structure....At one point Mike's film crew were only inches from my daughter's face. She was trying to paint and I was giving her instructions on the proper way of cutting in. The camera guy was actually in the way.

The Holmes Spot: What was it like seeing Mike Holmes and his crew at work?
Belinda: It was great seeing first hand, Mike and his crew at work. We actually watched them earlier in the week when they were just starting the castle, and then again the day of the community rebuild...when the castle was getting close to completion. Whenever we needed a break, from moving wood chips, we would sit and watch the crew working. It was great seeing them work as a team, and watching the progress they made on the castle. Overall the whole thing was a great experience...one that we will never forget. It left us with a really good feeling inside, knowing that we were able to help in some small way, and knowing that so many kids will get a lot of enjoyment out of it.


Make sure you tune in tomorrow to HGTV Canada see the new episode of Holmes Makes It Right, "Building Castles." If you don't live in Canada, Mike's new show will premiere in early 2013. The exact date is TBD.
Posted by The Holmes Spot at 12:41 AM

Email ThisBlogThis!Share to TwitterShare to FacebookShare to Pinterest
Labels: Holmes Makes It Right