2012 was a very busy year for Mike and his crew, and the Holmes Spot blog had a very busy year attempting to write all about it! As this first week of 2013 comes to a close I figured I'd post some important dates that stood out from last 12 months -- mostly from May on forward, because I started this blog in early May of 2012! All I can say is that 2012 was a GREAT year!!! Here's to 2013!

THE HOLMES SPOT 2012 YEAR IN REVIEW

JANUARY
﻿ - January 2012... Mike's green building project in Alberta, Canada "Wind Walk" gets the go ahead to proceed by the local government.

MARCH
-March 9, 10, and 11... Mike and his crew have fun making an appearance at the Megaspeed Custom Car and Truck Show. 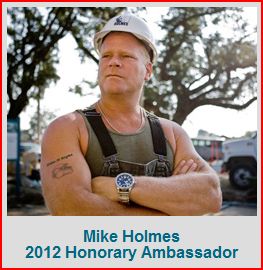 MAY
-May 1... Mike is named Building Safety Month Honorary Ambassador

-May 3... The Holmes Spot blog posts its first blog entry!

-May 13... Mike Holmes receives an honorary doctorate in pedagogy from Niagara University during its spring commencement ceremony.

-May 18... Mike meets with locals and takes suggestions for the rebuilding of a castle in High Park, which had been burned down by arsonists in March 2012. 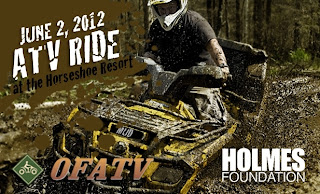 -June 2... Mike and several members of his crew participate in the 6th Annual Ride for the Holmes Foundation presented by OFATV and Can-Am. After several years of coming out cleaner than he went in, Mike finally got stuck in the mud!

﻿﻿-June 5... Mike officially reveals his new ink after a contest to guess what his new tattoos are ends.
﻿
﻿
-June 12... Mike gives the keynote address at the World Indigenous Housing Conference.

﻿﻿JULY﻿﻿﻿﻿﻿
-July 7... Mike and his crew work diligently along side members of the community and the Toronto Fire Department in intense heat to finish rebuilding the Jamie Bell Adventure Playground in High Park. The build is filmed for Mike's new show Holmes Makes It Right.
﻿﻿
-July 16... Mike Holmes and Michael Quast, Holmes Group CEO, part ways.

-August 3... Mike turns 24 and a half times two. The Holmes Spot blog celebrates Mike's birthday with the release of The Mike Holmes Cartoon, a four minute long animated monstrosity that gratefully Mike loved! Mike celebrates the day of his birth on site with friends and family.

-August 19... All American Handyman premieres in the US.
-August 20... Forbes names Mike 3rd most trusted celebrity.

﻿﻿SEPTEMBER
-September 4... Mike confirms that the homes he helped build in the Lower 9th Ward in New Orleans are still standing strong after Hurricane Isaac.

-September 20... Tool maker Hilti announces it will be providing Mike and his crew tools for the new series Holmes Makes It Right.

OCTOBER
﻿﻿-October 16... Holmes Makes It Right premieres in Canada on HGTV. To promote the show, Mike dresses up like "Super Holmes" complete with red cape and super "H" on the front of his overalls. He greets fans on the streets of Toronto and one lucky fan wins $5000!