When the Truth Comes Flooding In

When bad things happen, we oftentimes have a tendency to blame others instead of ourselves. Such is the case in the article below where Mike describes an older house with a leaky basement. The owners had lived in the house for a number of years with no problems, until two custom homes were built on either side of their home. Suddenly, water began flooding in through their foundation walls. The homeowners' first inclination was to blame the builders of the new homes, after all the leaks started when the homes were built. But upon further examination, Mike soon came to the realization that the old home had some major problems such as cracks in the cinder block foundation, an improper weeping tile system, and a lack of window wells, all of which could have been addressed with proper maintenance. As Mike says, nothing lasts forever. Everything must be maintained to avoid the inevitable wear that come with time. Sometimes when something goes wrong inside a house, it isn't because of the builder. We all need to learn how to properly maintain our homes and address wear and tear before it becomes a major problem. If you neglect basic home maintenance, you have no one to blame but yourself.

From the Ottawa Citizen: 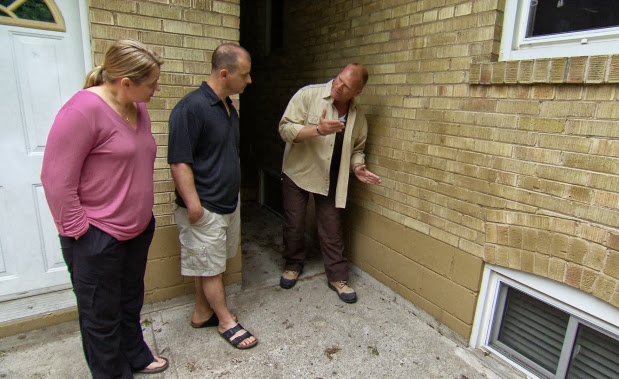 A basement window that is built at grade level or below should have a window well to help control water and prevent leaks. Photograph by: The Holmes Group


When problems start happening in the home, most people want to blame something or someone else. “Oh, it’s because no one knows how to do anything anymore.” “They used cheap materials.” “They didn’t do this right.”


I’ve made those criticisms a few times myself. But sometimes the source of the problem isn’t a bad contractor, tradesperson or builder — it might be a little closer to home.


I was working on this job where the homeowners were convinced their basement was flooding because two big custom homes were built on both sides of their house. They had lived in their home for almost 10 years and never had a problem. But after these two homes were built, water started coming into the basement through the foundation and around the windows.


Why would this happen? Think about it. A big home means a big roof. So all the water that would have fallen on the ground is now falling on this one roof, and being drained at a few points on the ground. Depending on how close these points are to the property next door, they can direct more water to their foundation. Now times that by two, because the home I was working on had this happening on either side.


The homeowners were ready to blame the builder who built the other two homes. But after taking a look at their foundation and basement windows, I knew the flooding could have been prevented.


For starters, there were no window wells around the basement windows. A properly installed window well, with a weeping tile, will take surface water away from the foundation and down to the weeping tile along the footings. Otherwise, all that water can leak into the window at grade.


If that wasn’t enough, the house had an old clay weeping tile system — not to mention no gravel around the weepers, just sand. The way those systems used to be built was that the terracotta pieces would just sit next to each other. If there was a tiny gap between them, sand could (and did) get in.


That sediment builds up over the years and can clog the weeping tile; and once that happens, the weeping tile won’t be able to drain as well. Before you know it, you’ve got water in the basement.


Anyone who has ever had to fix their foundation knows that the best repairs happen from the outside. So that’s what we did.


We had to excavate the side of the house and grind out the cracks. Then we filled them with hydraulic cement, which expands as it dries so it seals the area. Then we installed a waterproofing membrane system — right from the footings to just above grade. It’s flexible and will keep the foundation watertight.


Finally, we covered everything with a dimpled membrane product that protects the coating underneath and stops the water from coming in.


This was a 60-year-old house, so it had some wear and tear. But if the right pro had properly addressed that wear and tear, the flooding wouldn’t have happened.


Eventually, this house was going to get water coming into the basement, regardless of the other two homes. All it needed was a couple more years and one bad storm. Did the two big homes on either side speed up the process? Yes. But they weren’t the cause.


The truth is that, if the house had been properly maintained — specifically the foundation, it wouldn’t have flooded. It should have been able to stand up to whatever extra run-off there was. The two custom homes put this home to the test. Unfortunately, it showed all the cracks and weak points in the foundation.


Nothing lasts forever. But building the right way and proper maintenance can help prevent problems and ensure your home stands the test of time.